This play has closed. 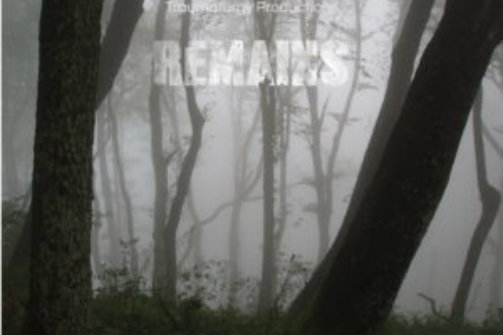 BOTTOM LINE: Although well-performed and beautifully designed, a bulky and flat script keeps this horror experiment from being any real thrill.

Three friends (kind of? Their backstory is left unexplored) set up camp at a supposedly haunted patch of forest in Wisconsin. No trees, except for one, grow in the clearing anymore. One of the girls, Azzie (the hilarious Eliza Greene-Smith), declares that the place "vibes her out." Rumor has it that the ghost of a murdered local named Sarah haunts the woods and takes vengeance on all those who enter. The trio brush it off as folklore, but quickly come to regret that decision when one of them, Leila (Iman Richardson), seems to become possessed. When Sarah’s ghost drives the final friend, Marcus (Hardy Pinnell), who grew up in the town, to kill an older man (Josh Frank) in self-defense, their desperation to escape this nightmare reaches a fever pitch.

Remains is a show with a gorgeous visual and aural sense for the eerie. D’Vaughn Agu’s set is minimalistic, comprising white walls, branches, and fresh mulch, but still effective in creating the world. The smell of the mulch in particular pulls the audience into the forest alongside the characters. Meanwhile, Christina Watanabe’s lighting stunningly emphasizes the show’s dramatic moments. Her use of color and her manipulation of shadows in particular turn the stage into a stark and dangerous space. Jorge Olivo's sound design filters in throughout the background, heightening tension without being at all distracting. Special mention, however, goes to the sound design for the audience’s entrance, which appears to mix heavy winds, clicking, and the shrieks of the damned to an excellently unsettling effect. Truthfully, a version of Remains in which only the tech cues are shuffled through would likely be a spectacular experience, perhaps even more frightening than the actual production.

This is not to detract from the work of the actors at all: each performer’s part is done to its fullest possible extent. Richardson in particular, despite not having as much stage time as some others, crafts the physicality of her disturbing possession with a clear skill that makes her a treat to watch. Truthfully, all of the actors, chiefly Pinnell, deserve to be commended for their handling of the piece. Many of the lines they had to deliver feel overly melodramatic, stunted, or otherwise awkward when compared to how people actually speak. This would be fine in a production which experiments with linguistic styling, but for a script that seems to aim at being realistic, it feels like an obstacle the actors had to navigate their way through. All of them navigated it well.

This is all to say that I believe this to be the absolute best production of Remains that could be done. The tech is jaw-dropping, the performances incredible, and it is all brought together by a director with a very clear vision. The problem is that, for a show that aims to bring horror aesthetics to the stage, the script fails at being scary.

From the aforementioned use of language, to the pacing, to the near-constant exposition, Remains falls just short of horror. This isn’t to say that there aren’t scary elements. Body contortion, gore, and disturbing themes abound. The problem is that much of the gore and viscerally shocking moments are unconnected to the ghost story at hand, and thus become more confusing than terrifying. It feels like horror tropes are applied out of a sense of duty, rather than because they are necessary to telling the story. Meanwhile, the actual story feels unclear. For all of the exposition that is loaded at the audience, the reasoning behind why this haunting with these outcomes is happening to these individuals feels foggy at best. There is never a reason, as an audience member, to care.

I believe that Traumaturgy Productions could easily succeed with their experiment of bringing horror aesthetics to the stage. Horror is not an impossible genre for the world of theatre. The wonderful design and performances prove that some great minds can stir up the potential for fright. There just needs to be a genuinely frightening backbone for them to work off of.

Remains is by Stephen Christensen. Directed by Jolene Noelle. Fight Choreography is by Jason Tate. Set Design is by D’Vaughn Agu. Lighting Design is by Christina Watanabe. Sound Design is by Jorge Olivo. Special Effects by Stephanie Cox-Williams. Stage Manager is Kristan Brown.