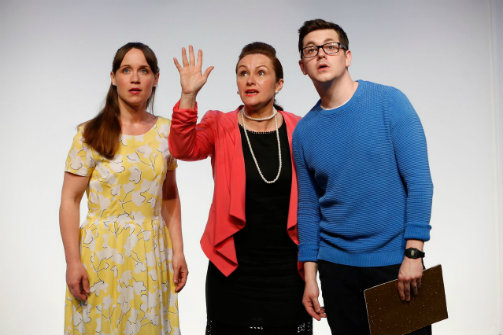 BOTTOM LINE: A dark comedy examining the lengths we're willing to go to make our dreams a reality.

What would you do for the home of your dreams? Lie? Manipulate? How about murder another human being? Playwright Philip Ridley examines this question in the U.S. premiere of Radiant Vermin, now playing at 59E59 Theaters. Often hilarious and at times rather poignant, Ridley’s contemporary new play is a 90-minute frenzied fall down one couple’s materialistic rabbit hole.

In the opening moments, we join Ollie (Sean Michael Verey) and Jill (Scarlett Alice Johnson)—young newlyweds madly in love, but yearning together to provide a better life for their unborn child. Soon appears Miss Dee (Debra Baker), a slightly sinister agent sent by the local council to head a new off-shoot of the government’s housing program. She brings with her the prospect of dreams fulfilled, offering Ollie and Jill a free home under the assumption that they will fix it up from its dilapidated state, thereby causing a real estate boom and gentrification of the neighborhood. After a moment’s pause the couple agrees to Miss Dee’s terms, a contract is signed, and the play continues on into the first night living in their new home. Late into the first night, the couple is awoken by the sound of an intruder. Ollie attempts to be the hero by confronting what is revealed to be a homeless man in the downstairs kitchen, resulting in a tussle, and the eventual accidental manslaughter of the vagabond. More incredibly, the slain body begins to glow, producing hundreds of tiny fairy lights that blind the baffled Ollie and Jill. The lights fade, and what was once a tattered and dreary excuse of a kitchen is now replaced by the very image of kitchen perfection in Jill’s mind.

An important thing to note about this production is that it is heavily based on the ability to be an effective storyteller. The set itself is nothing more than a simple proscenium, painted completely white, and lit by bright white lights. It’s in the performances by Johnson and Verey, and their complete physical involvement in describing every detail, that we are able to vividly imagine what each scene must look like. Both actors never lose the ability to do this, maintaining a high level of energy and complete commitment to the given circumstances throughout the piece. It’s always a joy to see performers “work for their supper,” and the performances given by Verey and Johnson leave no room for desiring more.

The production then continues on as we observe Jill and Ollie embrace the power of their new home, and its ability to transform into exactly what they crave in each and every room. This, of course, is at the cost of murdering a different homeless person, individuals they nickname as “renovations,” every time. All of these poor souls are spoken about, but never seen, except for the reappearance of Baker in the show’s most touching scene. Not billed in the pamphlets, Baker enters the show as Kay, a homeless woman lured to Ollie and Jill’s home to be killed in order to transform their nursery. Jill takes a moment to speak with Kay, and her story is heartbreaking and incredibly performed. In a show highlighted by moments of over the top dialogue and larger than life behavior, Baker’s physically still, naive, and earnest portrayal of a woman so filled with sorrow and regret is absolutely stunning.

After reaching the show’s climax—the “birthday party from hell”—Ollie and Jill become exemplary cases of enough never being enough. They have a healthy newborn baby, they have each other, and they have the home of their dreams. However, that still leaves them longing for more, and without giving away the ending, they find a way to continue feeding their never-ending lust for perfection.

Director David Mercatali is a genius in his direction of Radiant Vermin. As I watched the production I was reminded of the sort of blocking and physical use of space in Rosencrantz and Guildenstern Are Dead—directing actors to use their bodies to tell the story, not just the scripted words. What’s more impressive is, upon sitting down to write this review, a closer look at the show’s script reveals that, save a few indications and entrance/exit notations, there is no blocking. None. It’s from Mercatali’s own mind that we get the ingenious, thoughtful, and wholly entertaining presentation we receive upon experiencing this production.

Radiant Vermin is a wildly hilarious, dark, and incredibly fun look into serious first-world obsession. With bits of political satire, horror, and exceedingly intelligent writing, it offers a little something for every type of theatregoer.