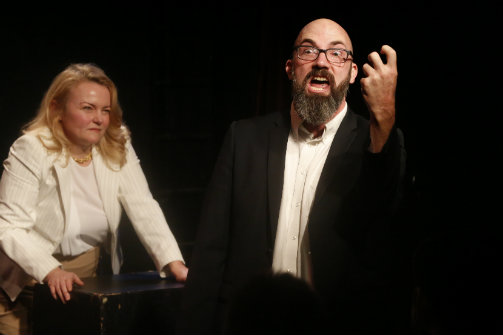 We are coming to the end of a terrifying election process. No matter your political beliefs, the low approval ratings and scandals surrounding both remaining presidential candidates have everyone running a little bit scared. What better subject for this year's Lovecraftian Pumpkin Pie Show?

As per usual for this annual performance, the action is structured into small stories that vaguely relate, and are mostly chronological, but are more variations-on-a-theme than cohesive story. Chapman's "tentacles" surprise by appearing in a less-than-timely political landscape. Though the show is essentially about a presidential campaign, and has a male and a female candidate who share some of our current candidates' tics and passions, these "bedtime stories for adults" are more comfort than catharsis.

Stump Speeches asserts that elections are a choice between two qualified politicians, one Democrat-ish and one Republican-ish, who have made similar ancient sacrifices to obtain power, and plan to honor their campaign promises (at least if their feet are held to the hellfire). Certain moments of the show mirror the 2016 election process, but at its core, the election featured in Stump Speeches is more of a Bush v. Gore than a Clinton v. Trump affair. One major change is that both candidates are senators (Kristen Vaughan and Clay McLeod Chapman) who are well-versed in the "back-door deals" that are a part of the political process. These back-door deals just become more literal in the context of a horror show: the back door is a bodily orifice, and deals are eels.

The debate portions incorporate some of the memorable moments we've seen in 2016: Senator Pendleton interjecting "Wrong!" at key moments in Senator Templeton's speeches, and Templeton standing firm for women's rights, but the candidate parodies never go for blood. Senator Pendleton gives a long speech about American values that is more eloquent, even sermon-like, than anything we've heard from Trump. By avoiding strident satire, this year's Pumpkin Pie Show actually offers a bit of comfort for those who appreciate the status quo of a civilized election process, where the loser concedes and the winner does their best to honor their demonic supporters' wishes.

The stories that occur off the debate stage are the highlights of the evening. Lovecraftian-style horror fits best in the monologue form, which Susan Ferrara's rally-attendee and Hanna Cheek's unseated FLOTUS demonstrate fully with eerie pathos. Kristen Vaughan is complicated and delicious in her portrayal of a would-be First Woman President with many, many years of experience under her belt. Katie Hartman's cheerfully-choreographed demand that the audience "vote" opens the show to great effect. Brian Silliman and Abe Goldfarb's debate commentary-cum-moderation offer a chuckle here and there. Overall, it's a very fun night of storytelling, in a comedy-sketch style, as long as you aren't expecting a response to the fear conjured in real life by the 2016 election.

(The Pumpkin Pie Show: Stump Speeches plays at UNDER St. Marks, 94 St. Marks Place, through November 5, 2016. The running time is one hour with no intermission. Performances are Thursdays, Fridays, and Saturdays at 8. Tickets are $20, or $15 for students, seniors, and military, and are available at horsetrade.info.)

The Pumpkin Pie Show is by Clay McLeod Chapman. Lighting and Sound Design by William Glenn and Dash Lea.