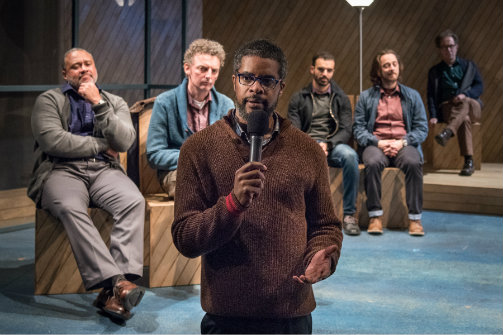 In a post-Brexit and Trump-crazy world, The Pearl Theater could not have picked a better time to give us Public Enemy. When Dr. Thomas Stockmann (Jimonn Cole) reports that his prosperous hometown’s tourist-filled waters are poisoned by dangerously toxic swarms of bacteria, he becomes a red-hot target in a town that would just rather they keep the money flowing in. Adapted from Ibsen’s An Enemy of the People, Public Enemy grapples with modern democracy and whether the majority is actually always right.

As we embark on the journey of Public Enemy, so many humble status quos are (albeit a bit awkwardly) shattered not only before us—but also by us. We, the audience, become a main role in the climactic town hall scene, when Stockmann launches into a long tirade about the tyrannical reign of a questionably responsible majority.

“Raise your hand if you think the majority is always right,” he asks. An otherworldly level of discomfort enters the room. He takes on the question for us: “The majority of people in this world are stupid!” The house erupts into a chorus of laughter and snaps. When he pointedly laments to us the mindless election of a literally insane leader, we all know what he’s talking about.

Jimonn Cole leads with a steadiness and unshakable strength as Stockmann. From the moment he steps on stage, there is something magnetic about his presence. His charismatic wit during the town hall scene is one reason alone to see this show. Nilaja Sun is a charming yet mature Catherine, and the husband-wife relationship she’s crafted with Cole is touching. John Keating as Aslasken, however, is a cheeky scene-stealer. I was laughing hysterically every time this quirky, lanky character (somehow like Kramer from Seinfeld, but British) crept onstage. He’s another reason to stop by The Pearl before November 6th.

A majority of Public Enemy, however, doesn’t live up to its climax. The scenes between Stockmann and the mayor of the town, Peter (Giusseppe Jones), are stunted. The tension is just not there—especially considering that these two are brothers, which is also difficult to imagine. Director Hal Brooks, sound designer Jane Shaw, and lighting designer Marika Kent have crafted incredibly engaging transitions, with striking light changes, a contemporary wood interior, and the sounds of machinery drowning out forest life in the distance. Unfortunately, the transitions are sometimes the most interesting thing happening onstage.

The end of Public Enemy leaves us with many more questions than answers. Does democracy make humanity stagnant? Must we tell the truth, even if it destroys us and our families? And the most jarring of all: Don’t we make up some of the majority? Isn’t our complacency also to blame? There’s a lot of culpability that this show asks us to be accountable for. How we will respond outside of the theater remains to be seen.