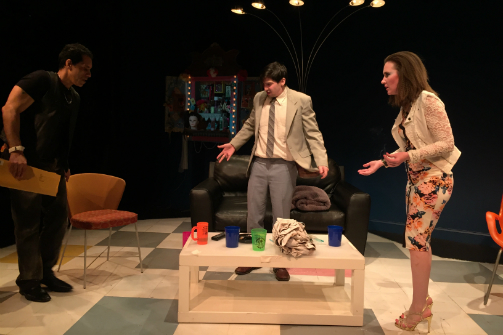 Tucked away in the Village at Teatro Círculo, Octavio Solis’s Prospect is making its East Coast debut. It’s evident that, as a show, Prospect is appreciative of the space it’s in. Small and dimly lit, Teatro Círculo stocks just enough space for a single-setting show. Prospect, which briefly takes place in a bar before moving to a house for the rest of its duration, is essentially that. It is a give-and-take relationship between the theatre and the show, and thankfully, they do each other great justice. Prospect is a simplistic idea in a small space expanded, made big, and made great by Solis’s dialogue, Elena Araoz’s direction, and the explosive, emotional, utterly human performances.

Running on auto-pilot, silently resigned to her illness and to her husband’s infidelity, Elena and Vince have created their own reality to cope. Enter Scout, who has come to expose these abnormalities in what feels normal and even a bit balanced, like Company lost the music and somehow became even more thematically depressing.

But Prospect revels in being more than a bit strange. It is its essence, set in a strange era with a strange set of characters out of place in the world they occupy, one that doesn’t seem to care for them. For the one literal dead stray cat in the bathtub, they all have their metaphorical ones they can’t seem to get out to the curb. They are battling their own identities, realities and messes. They are trying to get ahead—in love, in life, and in death. They rise and they fall. They’re non-likable, but for better or worse, they’re pitiable and they earn your empathy.

Solis and Araoz have found a perfect space in Teatro Círculo, just small enough to make you feel like you’re a fly on the wall in this moment in time. It’s a little hole in the wall, dimly lit save for blue and magenta neon accents and a flashing television set (the superb, telling design by María Cristina Fusté couldn’t have been more fitting if the audience was literally transported back to the ‘80s to watch reality unfold). By the end of the show, it’s smoky and smells of fake pot, an aspect of the staging that was off-putting to some but maybe that is (or should be) the point—to witness and thrive in the characters’ and our own discomfort.

Because it plays off such a simple idea, however, it runs the risk of dragging, especially in Act Two, which piggybacks off an intermission that somehow comes so abruptly you’re not sure for a second if the show is over or if it’s just begun. The dynamic between the four leads is so strong, particularly as more is revealed internally about each character, that the secondary conflict with Winter (Terrell Donnell Sledge) and Red (Danielle Skraastad) feels like an unnecessary distraction. It would be a shame to lose that side plot, especially with Sledge’s portrayal of Winter, simultaneously smooth and hot-headed and reminiscent of a young Michael K. Williams. But Scout, Liza, Vince and Elena can carry and do carry the story on their own, at least in this incarnation. Much more seems like a distraction from the master class performance of Steur, who is most captivating at her most fragile and loneliest.

Prospect pushes the envelope in unexpected ways, but it is, at its core familiar and minimalistic. Solis wrote it the early ‘90s as a reflection of Reagan’s America, but passion, ambition, fear, pain, hopelessness and hopefulness—those are universal and timeless. We shell out space for ourselves in the world, and Prospect reflects that in a whole new light.

Prospect is written by Octavio Solis and directed by Elena Araoz. Lighting Design is by María Cristina Fusté. Scenic Design is by Jorge Dieppa. Costume Design is by Sarita Fellows. Sound Design is by Nathan Leigh. Technical Direction is by Iván Roberto Salinas. Stage Manager is Alannah O’Hagan.