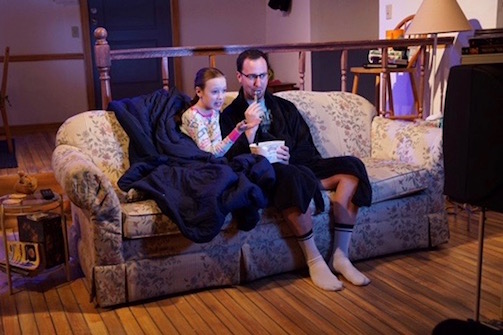 BOTTOM LINE: An entertaining and timely comedy for all political persuasions.

The Hollisters are just your typical suburban Connecticut family: Laura (Jody Christopherson) and her husband Arthur (Kevin Argus) both have good, solid jobs and their preteen daughter Sophie (Casey Nadzam) goes to an elite, private elementary school. However, when Laura returns home late one night from a town council meeting and announces that she’s running in the primary for State Representative, their quiet family dynamic gets turned upside down.

Arthur is not at all enthusiastic but wants to support his wife, and Sophie is gung-ho for mom to win. Laura enlists the help of Nick (Brian Miskell), the “nice kid who works at the bank,” to manage her campaign. Nick takes his position very seriously and as we learn, also has a brief political history, having run for the same State Representative post five years before. Laura’s competitor, the never seen Frances Lindy, who previously ran unopposed, has more than enough money to keep her campaign as the front-runner. Desperate for every potential voter, Laura soon realizes that she is in over her head and flip-flops on issues from one call to the next. Resolving to quit her teaching job to focus fully on the campaign, the family is left with less money to pay the bills, forcing Sophie to transfer to a lesser public school in town. What’s worse, when Nick delves into Arthur’s background, questioning his past and his political views, Laura has to decide if winning this campaign is worth potentially losing her family in the process.

Set in 1999 during the Clinton administration, playwright Gracie Gardner effectively draws amusing parallels to our prevailing political climate by pulling examples from a particularly notorious time in Presidential history. Alex Keegan’s direction is excellent, providing us with a charming glimpse of this family’s day-to-day life within the frame of a stressful campaign.

Particularly touching are the father-daughter moments between Arthur and Sophie: sitting on the couch eating ice cream together at the top of the play, and Arthur’s priceless rendition of “Ghost of Tom Joad” which completely embarrasses Sophie. Argus gives a strong performance as the easy-going Arthur; his characterization is nuanced with both humor and heart. Christopherson is likable and earnest as Laura, and Miskell’s restrained, wry delivery gives Nick a humorous edge. Lastly, Nadzam is enjoyable as the precocious Sophie, balancing a sweet, darling quality with the tantrums of a demanding adolescent.

As with living room dramas, the Hollister home is at the center of the action and scenic designer Matthew Imhoff is spot-on with his suburban split-level ranch design, complete with stencil border and cornflower blue accents. Further, Sarah Stolnack’s lighting design and Lawrence Schober’s sound design compliment each other well, most notably in Sophie’s many late night Sailor Moon television binges.

Winner of The Sanguine Theatre Company’s Annual Project Playwright Festival, Primary brings the struggle of campaigning closer to home and proves that sometimes the best intentions have their consequences, even at the lower levels of democracy. Overall, Primary is an entertaining and timely escape from our current political circus to laugh, or cringe, at a time when public service was no less controversial, but seemed somewhat simpler.

(Primary plays at the IRT Theater, 154 Christopher Street #3B through April 24th. The show runs approx. 1 hours 45 mins, including one 10 minute intermission. Remaining performances are Wednesdays-Saturdays at 8pm; Sundays at 3pm. Tickets are $18. Tickets are available at brownpapertickets.com or call Brown Paper Tickets at 1-800-838-3006. For more information visit sanguinenyc.org).