Off Off Broadway, Immersive Theatre
Runs through 10.31.16
Two spots in Brooklyn...and your own home 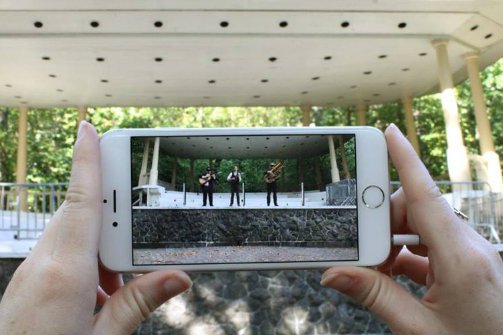 BOTTOM LINE: Fright-seekers will revel in delight with Old Bones, a hair-raising, immersive, augmented-reality theater experience happening in Brooklyn...and in your very own bathroom at home.

AntiMatter Collective’s latest performance expands the parameters of immersive theater in an exciting and original way—and just in time for Halloween. This three-part event can be done on your own time throughout October, although the third part must be officially scheduled once you finish the second. It’s a scavenger hunt of sorts, where the treasure chest at the end is Baba Yaga (aka the Bone Witch), a mythic witch from Slavic folklore who lives in the woods inside a screeching flying house supported by chicken feet. Each part of the performance brings you closer to finding her.

The first part can be downloaded from the AntiMatter Collective’s website. The invitation to participate is intriguing in itself—it’s a performance in your bathroom after all! After downloading the audio track to your smartphone, you wait until it's dark, turn out the lights, and listen to it in your bathroom—alone. The voiceover artist (Bridget Saracino) is powerfully seductive, curious, and ultimately unnerving as she paints a picture of what’s to come. Your hairs may stand if you allow yourself to become lost in her expressive storytelling and visualize the picture she paints. Think of the “Bloody Mary” game, but more sophisticated and nuanced.

The next part builds on the first, this time incorporating video (also played on your smartphone). A map (also from AntiMatter’s website) leads you to an easily accessible point in Brooklyn's Prospect Park, and then your virtually guided on-foot journey begins. Integrating music, dance and visual art, it is a well-rounded performance that gave me a lot to mull over. Without giving too much away, I will say that trekking through the depths of Prospect Park with an intriguing voice coming through your headphones is a rush as your aural abilities to the outside world are compromised and your other senses become heightened. I found myself jumping at the sounds of rustling leaves or snapped twigs. My inner horror-flick nerd lit up!

The pinnacle of the entire event is the third part, a one-on-one performance. If you're an immersive theater aficionado, this will satisfy your desire for an intimate and personalized encounter. Prepare to communicate and not be too shy. Baba Yaga will probably not physically look like who you imagined; but she is said to wear many skins. The detailed interior design of the location is a huge asset in setting the mood. Overall, Old Bones is really freakin’ cool if you’re seeking fresh and interesting theatrical performances—and if you’re brave enough to go through it alone. It’s mysterious, spine-chilling, and a strangely sexy Halloween treat.

(Old Bones runs through October 31, 2016. The running time of Part 1 is 11 minutes and is experienced in your home bathroom at night; Part 2 is 13 minutes and occurs throughout Prospect Park; and Part 3 is 30 minutes and is performed at an undisclosed location in Crown Heights. Parts 1 and 2 are experienced at your convenience; Part 3 is by appointment only. Thirty-minute time slots are available Wednesdays and Thursdays from 7:30-10; Fridays and Saturdays from 6-11; and Sundays from 5-10. Part 1 is $1; Part 2 is $5; and Part 3 is $15. Tickets and instructions are available at antimattercollective.org.)