By José Rivera, adapted from The Maids by Jean Genet; Directed by Daniel Irizarry
Produced by One-Eighth Theater and INTAR Theatre 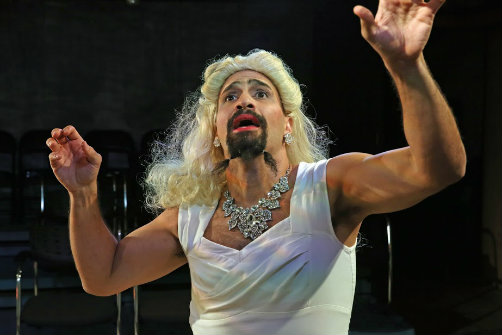 Daniel Irizarry in The Maids. Photo by Carol Rosegg.

BOTTOM LINE: INTAR's intimate space is used to its fullest potential in this vital adaptation by José Rivera.

One-Eighth's production of José Rivera's The Maids leans toward the immersive: an entering audience is led through a costume closet, brushing past the dresses actors will soon wear onstage. An actor interacts with the audience during the pre-show, dressed in a white apron and a white kerchief, buffing shoes and interacting with those in the front-row as everyone takes their seats. The setting is Puerto Rico, circa 1941, with fuzzy gramophone music and heavy colors on every surface. The lighting is yellow and lazy, creating blind-patterns on the walls like a noir film. Though the theatre remains at a comfortable temperature, there is still a clear sense of stuffy afternoon heat.

Genet's original maids Claire and Solange are, in Rivera's work, sisters Monique and Yvette; they are played by two men, Charlie Munn (Yvette) and Casey Robinson (Monique), as Genet is said to have originally intended. Then without warning, Munn and Robinson are replaced by Laura Butler Rivera and Folami Williams, who pick up directly where their male counterparts left off. Then one man and one woman take the stage, then the other pair, then both pairs. The two actors playing each character imitate each other; the characters are written to shift and merge into one another in their closeness. Another mirroring element emerges when the performers approach the audience, giving them demi-lap dances, pulling props from under their seats, and (most dangerously), wigging an audience member and demanding he cry "ow!" as the brush is tugged through Yvette (or is it Monique's?) "hair." When the director Daniel Irizarry enters as La Doña, the mistress of the house, and Rivera himself makes a brief appearance as a third Monique, the production becomes a veritable hall of mirrors, distending and chopping the text into athletic, often-hilarious lazzi, but obscuring meaning and character trajectory as well.

If the audience is confused, and is unable to keep track of who exactly is playing who at a given moment, and why, it hardly matters. It's not as though the play loses any clarity. Perhaps it even gains it, for despite the role-switching, Rivera's command of compelling modern dialogue grounds this adaptation more thoroughly in reality than the original. An armed uprising led by the unseen Don Pedro (a reference to Pedro Albizu Campos, an important figure in Puerto Rico's history) throws open a few windows against the claustrophobia of Genet's The Maids. Where the passage of time in the original feels warped and unreal, Rivera keeps things clear with updates on the uprising emerging along with the play's progress. These updates perhaps bear more resemblance to The Balcony than The Maids, but for some viewers this outside world may be a selling point, and it's not a change outside the scope of a faithful adaptation.

One-Eighth's suitable youthful, vital production of this new work is mature in its emotional depth, but explosive in its physicality. The actors are uncontrollable. They literally bounce off the ceiling. The cast is also well balanced in their skill and style, an essential element in a play about power dynamics. Being in INTAR's intimate space with them firms up your muscles by proxy, a vital theatre experience that's good for the blood, as well as the soul.

(The Maids plays at INTAR, 500 West 52nd Street, 4th floor, through October 23, 2016. The running time is one hour forty minutes with no intermission. Performances are Thursdays through Saturdays at 8; and Sundays at 5. Tickets are $25 and are available at intartheatre.org.)