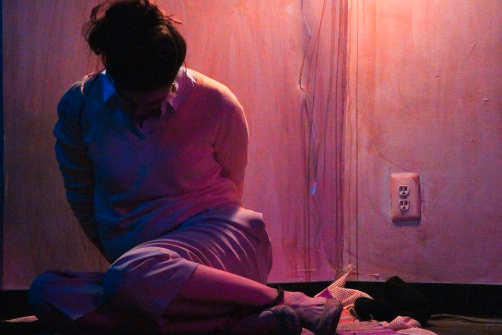 BOTTOM LINE: A powerhouse ensemble wrestles with an introspective tangle of race, class, gender, and crime.

What do women do with their wounds? There are as many answers to that as there are women. Malefactions, a new play by Matt Minnicino, is the unflinching interrogation of four women whose wounds lead them to the same objective: “Burn THEM down.” Who is “THEM?” “THEM” is the establishment, the patriarchy, the nebulous evil that wounds us all.

If that sounds heady and borderline pretentious, you agree with most of the characters in this play. The women who inhabit this world are erudite, amazingly self-aware, and not interested in your nonsense. The Lost Girls, as they call themselves, are Io (Karen Eilbacher), Luna (Marlowe Holden), Thorn (Ashley Marie Ortiz), and Dot (Lucy Freyer).

The Lost Girls are a mix of queer women, women of color, women from privilege, and women who’ve never had anything. They all have massive feelings, big egos, and messy lives. In short, they are real people. It would be an understatement to say I was excited to see complex women onstage. I was rabid. These women aren’t good or bad. They’re real. And that is something I have sorely missed seeing onstage. Props need to be given to the casting director, Bailey Jordan Koch. These women are so well cast I wondered if the parts were written for them. (According to one actress I ran into, they weren’t.)

The play begins with the Lost Girls gathered in a basement to plot their revenge against “THEM.” With fire. How will it go? They aren’t sure. It’s not spoiling anything to say: badly. The Lost Girls find themselves with a hostage named Winter (Andrea Goldman), a woman so blazingly middle class and whole, that she shines like a beacon of everything they’ve ever felt they’re not. Sure she’s covered in blood, but her wounds are only skin deep. Goldman could teach a master class on how to suffer onstage. Her chilling torture scenes stayed with me for hours after the performance. In fact, every member of this ensemble is a powerhouse; these actors do not spare your feelings.

Minnicino’s writing is dense, academic, and thoroughly self-aware. Just when you think you can’t hear one more poetic warble about life’s ephemera, Ortiz charmingly shoots, “What are we doing here, teaching a yoga class?” Minnicino’s script walks the line between thoughtful and overwritten, but ultimately succeeds in a nuanced portrait of existential feminist pain. However, some of his writing is so thick that it takes the actors a few minutes to warm up into the poetry. And be warned, this is play is almost two hours with no intermission. Minnicino has written an ambitious play, and the cast and crew have expertly met that challenge.

The direction, by Lauren Z. Adleman, wrings every drop out of Anastasia Roma’s set design in the dingy basement at Chinatown Soup. Though the action mostly takes place behind the fourth wall, I couldn’t help but feel the potential for an actor to rush me at any moment. The direction, helped greatly by the Jorge Morales Picó’s sound design and Kelley Shih’s lighting design, is electric. In this world, anything can happen.

The costume designer, Annie Simon, has done miracles with black. From structured jackets to sports bras and baggy sweatshirts, how these women dress for a night of crime tells us everything we need to know about who they are.

In short, this is a play to see if you are fed up with the theatrical deluge of men behaving badly. In fact, Malefactions is the opposite. It’s women behaving badly, and it might be my new favorite genre. This is a play about women who have been screwed by the system, and who want to screw it back. The belief that these stories are worth telling is what makes Malefactions such an important show.