Locusts Have No King 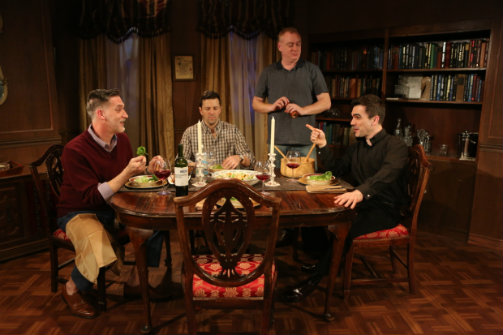 BOTTOM LINE: A riveting descent into cataclysm through the lens of Christianity, gay men, and dinner parties.

J. Julian Christopher’s play is certainly not shy. Locusts Have No King begins with a recitation of Christian scripture by a narrator so serious he borders on melodrama, and then the same middle-aged narrator enthusiastically fellates another man. After tackling the intersection of Christianity, queerness, and middle-aged sexuality in the first two minutes, it only gets more complicated from there.

INTAR’s reputation precedes them, and I was not surprised to see such a nuanced, hilarious, and honest production on their stage. Christopher’s play is a revelation (pun intended). Locusts Have No King is a play that does not avoid spectacle. And yet Christopher’s brilliance as a playwright is that he keeps the characters genuine in the face of such dramatic given circumstances.

Where this play really succeeds is how the narrative reveals itself over the evening. As the night goes on, the drama lies in learning just who these people are and why they’re here. What we learn in the first five minutes (I can’t reveal more than this without spoiling the plot) is that we are in the living room of a gay couple about to have a dinner party with their neighbors, another gay couple. If this sounds like typical theatrical fare, you are far from correct. What unfolds over the next 90 minutes is a deeply personal exploration of Hell on Earth, both literal and metaphorical.

The team on this play is tremendous. David Mendizábal’s direction builds the tension so delicately that you hardly feel it until you are suddenly on the edge of your seat. On the night I went, the audience was gleefully screaming and gasping. Mendizábal has orchestrated a theatrical hurricane. And special note should be made of how seamlessly he has accomplished this play’s logistical demands. There are a few truly breathtaking moments created by the expert set design (by Paul Tate dePoo III), lighting design (by Alan C. Edwards), and sound design (by Jesse Mandapat). Every detail of the production on this show is excellent, full of as much nuance as the writing and acting.

And what acting it was. These are heavy hitters. Every performer on the stage is complex, hilarious, and very real. Liam Torres as Marcus is charming and vulnerable as the moral center of the action. David Grimm as Jonathan has comedic timing oozing out of his eyeballs but never feels disingenuous or shticky. John J. Concado as Matthew is brilliantly bizarre in a role that had the audience members behind me whispering “what the f***?” And finally Dan Domingues as Lucus is hard to tear your eyes away from. He is equal parts charming and trainwreck; it was a treat to watch.

Locusts Have No King is not afraid to get weird, and you should not be afraid to go. INTAR has created a night of deliciously complicated drama that will stick with you.

(Locusts Have No King plays at INTAR Theater, 500 West 52nd Street, through May 1, 2016. The running time is 90 minutes without an intermission. Performances are Wednesdays through Saturdays at 8; Sundays at 5. Tickets are $30 and are available at intartheatre.org.)