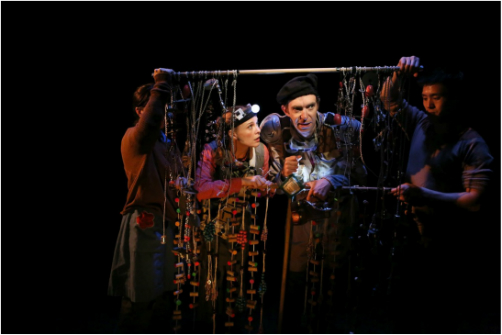 BOTTOM LINE: An engrossing journey through a world of darkness where wonders and surprises await behind every shadow.

“What if there were a world without light?” This is the question that playwright Greg Steinbruner first posed when creating his play for families, Light, A Dark Comedy. The play tells the story of Moth (Tami Stronach), an 11-year-old girl, who lives in a world where all vestiges of light in the world, including the sun, have disappeared. No one’s sure how long this has been going on and citizens have created means by which to get around in this pitch black world. Everyone carries a glowing flashlight and, when traveling outside, they hook themselves up to an overhead line system to ensure that no one goes “off line.” Sustenance is provided by the Mushanto Mushroom Corporation (mushrooms, after all, do not need light to grow) and a possibly corrupt mayor (Carine Montbertrand) delivers daily radio messages, reassuring the populace and touting the work that her government does.

Moth lives with her caring Mom (the warm Jenny Lee Mitchell) who operates a laundry service to help pay Sleeper Services for the care of Moth’s father, who has been taken to the Slumberyards after falling victim to The Sleep, a condition where adults fall fast asleep and can no longer care for themselves. Moth encounters a group of revolutionaries who are attempting to reveal the unpleasant truth about Sleeper Services and Mushanto—all seemingly run by the shady (no pun-intended) mayor.

The ensemble is made up of seven incredibly engaging actors who play seventeen different parts with all but Stronach playing multiple roles. As Moth, Stronach is the heart of the play and barely leaves the stage. From her first moments onstage, she connects with the audience and we root and care for her as she journeys to discover the cause of all of this darkness.

It’s a fascinating world that Paper Canoe Theatre Company has put together and from the very first moments of the play, when a dapperly dressed gentleman (whose identity we don’t discover until later) uses a vacuum-like contraption to suck the houselights and stage lights out, we are fully immersed in this universe.

And what a stunning universe it is, especially as realized through Deb O’s simple but inventive set and prop design, Barbara Samuels’ lighting which somehow makes us believe it’s pitch black even though we can see everything, Theresa Squire’s costume design that manages to effortlessly differentiate every character change, and Mark Van Hare’s eerie and evocative sound design and original music. A very special mention needs to also be made of Tom Lee’s projections that create worlds of themselves and advance and clarify the story immensely, and Lake Simons’ puppet design which, along with Jay Dunn’s graceful manipulation, gives life to a beautiful flying insect in the latter part of the play.

Adrienne Kapstein’s direction is tight and precise, especially in the first half of the play before Moth goes off-line in her effort to find the truth. Steinbruner has created a complicated world—so complicated that a three-page glossary of terms is included in the program—and Kapstein does her best to keep things moving, though the second half of the play lacks the specificity and focus that so grounds the first.

Though billed as a play for families and there were many children in the audience (including my date, my 9-year-old son). I’m not sure how many were fully following the piece’s complicated and convoluted rules and logic. There were times when my son would whisper in my ear asking, “What does that mean?” and I found myself unable to answer because, I too wasn’t fully sure what things meant. The piece is also subtitled “a dark comedy,” which, while a fun comment on the title, is not fully accurate. This is not a drama by any means, but the themes the piece deals with are a bit more serious than the subtitle would indicate.

All in all, though, Light, A Dark Comedy provides a great opportunity to get lost in a strange and mysterious land—and isn’t that what all good theatre should allow us to do?

(Light, A Dark Comedy plays at the Triskelion Arts Muriel Schulman Theater, 106 Calyer Street in Brooklyn, through April 10, 2016. The running time is 85 minutes with no intermission. Performances are Saturday and Sunday at 10:30 a.m. Tickets are $18 and are available at eventbrite.com. For more information visit papercanoecompany.com.)

Light, A Dark Comedy is by Greg Steinbruner with Paper Canoe Theatre Company. Directed by Adrienne Kapstein. Set and Prop Design is by Deb O. Lighting Design is by Barbara Samuels. Costume Design is by Theresa Squire. Sound Design/Original Music is by Mark Van Hare.  Puppet Design is by Lake Simons. Projection Design is by Tom Lee. Dramaturgy is by Jeremy Stoller. Stage Manager is Angie Hesterman.