Off Off Broadway, Play
Runs through 6.19.16
IRT Theater, 154 Christopher Street 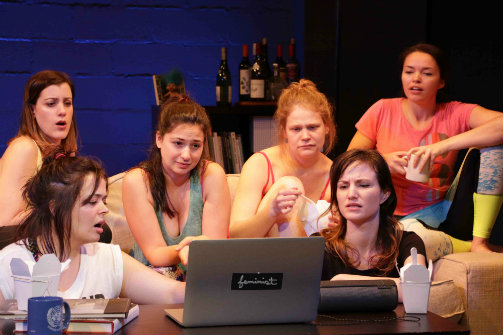 Feminism is alive and well and bolder than ever in a new play created by The Living Room, conceived and scripted by Lillian Meredith. #liberated. No, that’s not a tweet. That’s the title of this daring, provocative and highly intelligent play about female objectification.

The story begins with five women on stage performing a Zumba routine. They then adjourn to glasses of wine and Chinese food and an open discussion about the objectification of women in mainstream advertising. And so begins another meeting of the Sister Support Group for the Daily Trials of Being a Woman, aka WIPE. (I’m not gonna lie to you. I have no idea how they got there either.)

As a man, I found this whole conversation fascinating. When else would I get to hear a group of women share their candid views about eroticism and pornography. That’s the beauty of the theatre at work here. And since this entire piece is created, written, directed and performed by women, with nary a man credited in its conception, I feel like I can trust what I’m hearing as honest.

For those of you terrified of encountering live nudity in the theatre, rest assured, you won’t see any body parts onstage that you wouldn’t encounter at a country club swimming pool. The play does eventually include video projections of nudity, but that’s about as shocking as watching Game of Thrones or Orange is the New Black, so let’s not quibble.

Under the direction of Rachel Karp and Jaki Bradley, the cast includes a strong ensemble of six with the chemistry of an acting troupe that has been together for years. No one performer emerges as more important than another. The understated performance of each actor blends together beautifully like the voices of a choir, with no one insisting on taking a solo.

I wish I could tell you that the play ends as lighthearted and jovial as it begins, but alas, it does not, which creates a tonal imbalance in the play’s trajectory. I’m sure there’s a way to solve this issue and keep the breadth of the journey intact, but the solution will have to be uncovered with a little more work and another production. I’m voicing hope here that The Living Room will continue its good work on a piece that has great potential. The play performs at a brisk 90 minutes but only scratches the surface of some of the complicated questions that it broaches. It could easily go for another 30 minutes and offer a deeper exploration of what makes female ownership of sexuality so abhorrent to society. In the meantime, and just to be safe, you should not miss this incarnation of #liberated.

(#liberated plays at IRT Theater, 154 Christopher Street, through June 19, 2016. The running time is 90 minutes without intermission. Performances are Mondays and Wednesdays thru Saturdays at 7:30; Sundays at 3 and 7:30. Tickets are $18 and are available at brownpapertickets.com. For more information visit irttheatre.org.)

#liberated is conceived and scripted by Lillian Meredith, created by The Living Room. Directed by Rachel Karp and Jaki Bradley. Set Design is by Frank Oliva. Costume Design is by  Heather McDevitt Barton. Lighting Design is by Scot Gianelli. Sound Design is by Ben Vigus.  Stage Manager is Jacob Halpern Weitzman.