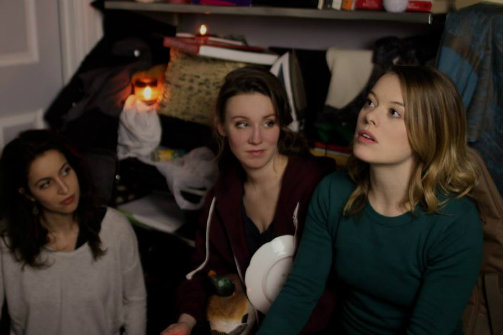 BOTTOM LINE: Mounds of family drama are buried under mounds of stuff in this new play about hoarding.

As Tolstoy wrote in his iconic opening to Anna Karenina, “Happy families are all alike; every unhappy family is unhappy in its own way.”

To cope with these myriad strains of unhappiness, certain members of the latter families will go to pretty crazy lengths. Some take refuge in religion. Others, career. Still others adopt habits of self-preservation that go so far beyond the realm of social acceptability that they are made pariahs, sometimes by those in their own (unhappy) family.

Keep, now playing at TBG Theatre, is the story of one such outcast. The play opens on a cluttered apartment, filled to bursting with various trinkets and personal effects. There is a mannequin, a stack of hangers, a boogie board—and that’s just what’s visible. The mess indicates that there may be far more clutter lying underneath the extensive top layer. Among the chaos sleeps Naomi (Kim Krane), the presumed caretaker of her filthy surroundings. She awakes to an unexpected visit from her two sisters, Jane (Madison Comerzan) and Kara (Jenna D’Angelo), the latter of whom has no desire to be there. Jane believes she and Kara will stage an intervention for Naomi, who’s gone so far down the rabbit hole that she has cat litter, but no cat.  Getting Naomi to make a change, however, proves…difficult. As with many of the hoarders on popular reality shows, Naomi is phenomenally attached to everything she owns, from empty boxes to dead plants.  After some convincing, Kara and Jane finally convince their sister to begin the process…and uncover plenty of surprises along the way.

Keep is the latest offering from Mastodon Theatre Company, an all-female theatre collective made up of three of the piece’s four actors. The founders met at Western Michigan University and their website states that they are committed to “producing work that sheds light on the human condition.” The aspect of the human condition on which they’ve currently chosen to shed light is certainly having a moment. From those aforementioned reality shows (most notably A&E’s Hoarders and TLC’s Hoarding: Buried Alive) to this affecting New York Times piece I read a few months back, hoarders are being exposed and analyzed and like never before. As someone with lingering hoarding tendencies, I can relate to what they’re going through— the feelings of “I might use that!” or “Hey! That was a gift!” Oftentimes, though, as Japanese decluttering guru Marie Kondo (author of The Life-Changing Magic of Tidying Up) would be quick to point out, the desire to keep has less to do with what’s kept and more to do with the keeper. What’s going on in someone’s life that leads them to hold onto torn plastic wrap, or a lock of their own hair?

Indeed, Keep is less the story of a hoarder than the family that made her so. We quickly discover that the fate of Naomi’s third sister, Margot (Leslie Marseglia), may have something to do with her sister’s sudden desire to suffocate herself with possessions. Though the deeper motivation behind Naomi’s obsession is only briefly touched upon, it is a universal one, and one that certainly sheds light on the human condition.

Though not broken up into acts, Keep starts out as one play and ends as quite another. In some ways, this is delightful—the situational comedy of the first 45 minutes contrasts nicely with the more grim final movement. Indeed, the only way to tell the story of a family’s journey is to see both the good and the bad—one cannot exist without the other. The bad, in this case, might be very bad, but it is still indelibly human. As the Roman playwright Terence once said, “I am human, and nothing of that which is human is alien to me.”

Some in Keep’s audience may reflexively assume that they are nothing like the main character. They have very few possessions, the thought of disorder pains them, and their relationships are too precious to be derailed by material things. But as the play underscores, we all have families. And even those that are generally happy may come upon times of sadness or strife that seem to last forever. It is how they deal with those struggles that define them and their members. Do they retreat into comfort, however self-destructive, or soldier on through the pain? Do they seek refuge in the certainty of the past, or revel in the possibility of the future? Do they shun those for whom they care most, or are they able to forgive?

The answers are always within reach—they might just be a little hard to find.