This show has closed; visit playlighttheatre.com for more info 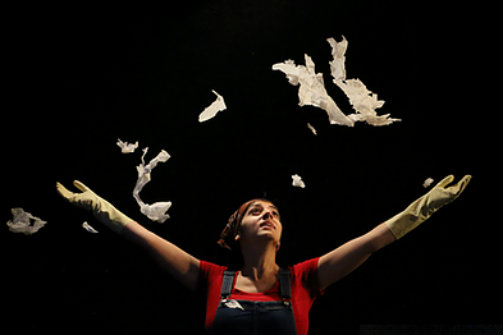 BOTTOM LINE:  Jellybean Junkyard is a hilarious but tragic glimpse into the disturbed mind of a well-meaning sanitation worker.

Jellybean Junkyard follows the inner/outer monologue of the lovably awkward antihero Dorcas Pinkleberry (Natalia Lopresti) as she cleans a Staten Island junkyard. The stage is strewn with refuse—empty cans, old bags, and the like—and even the audience is made to feel "like trash," as they are constantly referred to by Dorcas.  As she begins to clean, she expresses a need to tell her story and her innermost secrets to the “trash” around her.  She begins with her childhood,  hilariously changing each name she mentions to a food-wrapper-inspired alias (to prevent identity theft, of course), and slowly but surely revealing her mental and physical anxiety.

Dorcas suffers from TOCD (a combination of Tourette’s and OCD), and Lopresti makes the odd physicalization and tics of a woman suffering from mental illness look extremely natural and realistic, allowing her character to appear charming and relatable despite these unique habits. As Dorcas organizes trash into three distinct piles on the stage, she continues talking about her anything-but-normal suburban Canadian life. Lopresti does a superb job of telling outlandish stories about her thought process and her sexuality as if they were the every day, all while picking up trash—making for excellent dramedy.

Dorcas tells of her ups and downs through life on her way to becoming not only a cleaning lady, but a sanitation worker (a title she holds with pride), and of her one major addiction, and her downfall: jellybeans. This in itself is a hilarious premise, and as Lopresti’s tearful and truthful depiction of addiction reels the audience in, in the next breath it inspires a laugh. That said, watching Dorcas “lose control” over herself due to her addiction is deeply disconcerting and uncomfortably real, speaking to Lopresti’s power as an actress.

Lopresti’s energy is hypnotic, and every ridiculous story Dorcas tells or action she performs has an immense amount of truth behind it. Through breathing life into Dorcas, Lopresti gives those who struggle in thankless jobs and with mental illness a needed presence in the theater. Jellybean Junkyard hits home and hits heavy, but added jokes and Dorcas’ quirks and unusually innocent candor keep it light enough for audiences to stay in tune.

Additionally, the use of jarring sounds, smells, and erratic lighting enhances the most dramatic moments of the production, creating an all-around sensory experience. This, as well as watching Dorcas constantly cleaning and organizing, creates an immersive environment that strays from the typical theater experience. This is not a production for a light night in the theatre; it is an extremely thought-provoking journey through the mind of an ill young woman sure to inspire laughter, concern, and reflection.

(Jellybean Junkyard played at Under St. Marks, 94 St. Marks Place, through September 24, 2016. Performances were September 22 through 24 at 7:30. Tickets were $15 online, $20 at the door. For more information visit playlighttheatre.com.)

The cast is Natalia Lopresti.