For more info on the Secret Theatre, visit secrettheatre.com

The Importance of Being Earnest

By Oscar Wilde; Directed by Christine Zagrobelny
Produced by The Instigators 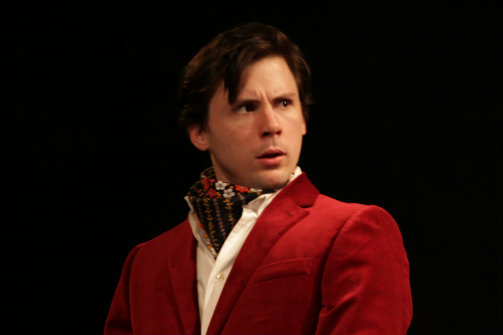 Fergus Scully in The Instigators' The Importance of Being Earnest.  Photo by Bryan Hamilton.

The Secret Theatre is a lovely space, tucked away under a train line in Long Island City. Its remoteness, and the intimacy of the small venue itself, make for a fireside performance experience that begins outside the theatre doors. Friends of The Instigators turned out to see The Importance of Being Earnest, enhancing the intimate feel of going to see a college production with one’s classmates. The college feel of the piece is enhanced by its bare-bones black-box staging, which uses only a divan, a small side table, a couple of chairs, and a window. This brutally simple approach to social comedy written by an aesthete is somewhat jarring, but draws focus to the actors.

While it’s a treat to see great actors at their craft, it’s also a pleasure to see a group of young actors collaborating under a director at the start of her career. Perhaps in time this young team will indulge less in unmotivated blocking/wandering around the stage, or engage each other more convincingly in physical struggles. As a result of the lessons learned in this piece, the opening of Zagrobelny’s next show will perhaps run more tightly and set a better tone for the later action. It’s clear that these artists are learning, and that they’ve learned from each other. I am glad to have been present for this entertaining, simple glimpse into their artistic development, and I look forward to seeing what The Instigators create next.

(The Importance of Being Earnest played at the Secret Theatre, 44-02 23rd Street in Queens, through October 16, 2016. The running time was two hours ten minutes with an intermission. Tickets were $18, $13 for students/seniors/under 35, and were available at brownpapertickets.com. For more information on what's playing at the Secret Theatre, visit secrettheatre.com.)

The Importance of Being Earnest is by Oscar Wilde. Directed by Christine Zagrobelny. Lighting Design by Stephon Legere. Production Manager is Dana Saffran.