The Illusionists—Turn of the Century 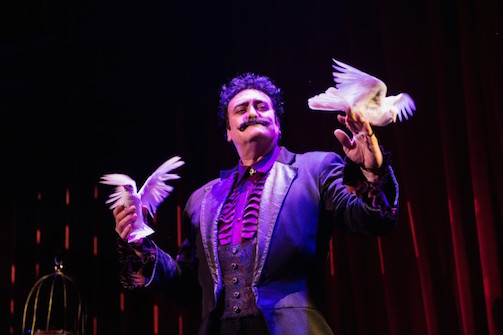 Rick Thomas in The Illusionists: Turn of the Century. Photo by Dylan Evans.

BOTTOM LINE: The Illusionists—Turn of the Century masters the art of magic and enchantment while slyly revealing exactly what’s missing in the average theatre experience: genuine belief.

Broadway audiences have caught glimpses of the vaudeville world through hits like Chicago or Cabaret, but with The Illusionists—Turn of the Century, New Yorkers are now able to buy tickets to a real vaudeville show on a Broadway stage. The nine master illusionists of the show—most of whom have been deemed “Magician of the Year”—dazzle the audience. However, I was truly stunned not by their tricks, but by the amount of selflessness I saw onstage. These folks are not actors; they are men and women using their own names, looking the crowd in the eye, sharing their passion, risking failure or their own physical harm, and “performing” solely for the sake of filling a room with childlike wonder.

Although I have always been a big fan of the Broadway musical, The Illusionists may have left me disillusioned with this other genre. I gave over to the magic; I believed—which is more than I can say about traditional Broadway hits. As much as I love Hamilton, I’ll always pause for to think: “this is great, but why do we have to sing about it?”, or “when did all the party guests learn this choreographed routine?” Here, in a setting that perhaps requires the most whimsy and belief, this belief factor came easily.

As for the individual “illusionists,” their range of talent has a treat in store for any viewer, young or old. Charlie Frye, a juggling clown that any Buster Keaton fan will cling to, brings a traditional vaudeville air to the stage with his bowler hat and slapstick style. Jonathan Goodwin, on the other hand, is a daredevil, who several times had me peeking through my fingers while he nailed stunt after stunt. Rick Thomas and the team of Jinger Leigh and Mark Kalin are more Vegas-style, bringing the sexy, smoky mysteries of levitation and disappearance to the forefronts of our minds. Justo Thaus brings his marionette magician “The Grand Carlini” to the stage in a truly heartwarming display, showing that perfect magic can still exist even when all the strings and wires are in plain sight. Dana Daniels—the family favorite of the night—is an outstanding comedian-magician who shows that tricks that go horribly wrong are still just as entertaining as the ones that play out seamlessly, especially when you have Luigi the Psychic Parrot by your side.

The rightful headliners of the night are The Clairvoyants: Thommy Ten and Amelie Van Tass, who most recently came in second on America’s Got Talent for their jaw-dropping mind-reading abilities. The Austrian duo begins with the basics: guessing the mystery object held in the other’s hand, predicting events, etcetera. However, the two soon show what they’re really made of; they list off all of the online theories as to how it’s done, and proceed to remove their shoes and jackets, showing an onstage camera that their bodies are free of any wires or devices. Then the barefoot Thommy goes into the audience requesting miscellaneous objects from purses and pockets so the blindfolded Amelie can guess what they are—which she does perfectly every single time. Amelie even guesses the exact expiration date on a bottle of Advil, a detail which most would never pay any attention to.

The entire ensemble of illusionists opened my eyes to that rare magic of belief that so often lies dormant in my theater experiences. If nothing else, The Illusionists—Turn of the Century presents a standout group of creative minds that are ready to treat you to an evening worth talking about—or at least worth researching in the middle of the night because you need to know how someone could possibly fit so many doves up his sleeves.

(The Illusionists—Turn of the Century plays at the Palace Theatre, 1564 Seventh Avenue, through January 1, 2017. The running time is two hours with one intermission. Performances are Tuesdays and Thursdays at 7; Fridays at 8; Saturdays at 11am, 3, and 8; and Sundays at 3 and 7:30. Special holiday schedule begins on Wednesday, December 21, with performances every day of the week. See ticketmaster.com for schedule details. Tickets start at $39 and are available at theillusionistslive.com or by calling 877-250-2929.)