I Will Look Forward To This Later

By Kate Benson and Emily Louise Perkins; Directed by Jess Chayes
Produced by The Assembly

Off Off Broadway, Play
Runs Through 4.23.16
The New Ohio Theater, 154 Christopher Street 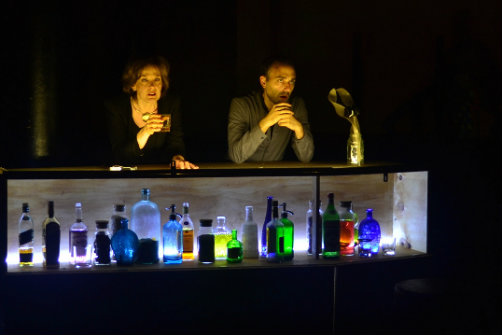 Linda Marie Larson and Ben Beckley in I Will Look Forward To This Later. Photo by Nick Benacerraf.

BOTTOM LINE: The death of a prominent writer forces family, friends, and lovers to confront his checkered past and lingering presence.

Whether in the memories they leave behind or the legacies we carry forward, our departed loved ones remain present in our lives. Yet, what happens when Dad’s ghost not only sticks around but pulls up a seat, pours himself a drink, and invites us to tango? Incorporating family drama, Kabuki theatre, and real-life interviews with aging artists, The Assembly’s I Will Look Forward To This Later investigates the ways in which our pasts actively shape our current existence, and asks whether we can evolve in spite (or because) of them.

The play begins at a point of conclusion, as an NPR-esque interview with “Great Man of American Letters” Wyatt Holloway segues into his memorial service. Yet, as Wyatt’s stoic widow Betsy (Linda Marie Larson) points out, the ensuing days are less an end to his survivors’ lives than the beginning of their lives without him. However, it’s hard to argue for Wyatt’s absence when, shortly thereafter, the man himself (James Himelsbach) enters from the audience, dances down a gangplank, and directly harangues the people he left behind. Publicly cheered for his socially-conscious writing, it’s revealed that Wyatt was “kind of an S.O.B.” in private, repeatedly unfaithful to Betsy and alternately estranged from and critical toward sons Robert (Edward Bauer) and Sam (Ben Beckley). Fittingly, Wyatt’s not-quite-welcome presence slips in and out of the events onstage, confounding and guiding his family’s choices as they confront this new chapter of existence.

Despite their best efforts, Wyatt’s influence bleeds into the characters’ lives in ways both obvious and subtle. Betsy’s settling of her husband’s paperwork reveals the purchase and lease of an apartment for Miranda (Emily Louise Perkins), his much-younger mistress. Without Wyatt to act as landlord, Betsy uses her control of the apartment to exact revenge, strong-arming Miranda into an indentured assistantship as the two clear the family home of Wyatt’s effects. Robert, a critic focused on late-career artists, milks his father’s connections to secure an interview with elderly sculptor Agatha (Vinie Burrows), Wyatt’s erstwhile lover and Miranda’s mentor. Meanwhile, the alcoholic poet Sam grapples with life in his father’s shadow—a struggle compounded as Wyatt’s ghost continually berates him for his failures and dependency. However, even in the apparent continuance of Wyatt’s mistakes, his loved ones manage to break some of the cycles he set in motion. Robert’s professional pursuit of Agatha morphs into a genuine winter-spring romance, while Miranda and Betsy find an unlikely bond in their respect for Wyatt’s artistry and shared love for the complex, tormented man. When tragedy strikes anew, Wyatt’s inner circle must address just how much of his legacy they have adopted, and what responsibility they must now take for it.

The show borrows several thematic and stylistic elements from Japanese Kabuki theater, a tradition whose supernatural motifs and deeply-codified aesthetics are transferred across generations of family performers. The use of the “ghost bridge” gangplank across which Wyatt traverses, the characters’ dance-like entrances and exits, and costume details such as Agatha’s kimono bathrobe and Wyatt’s oversized tailcoats all nod to this source material and underscore the piece’s similar attention to ancestral influence and artistic distinction.

The play’s many allusions to interviews, from the recorded dialogues which bookend its action to Robert and Agatha’s discussions of her lifelong career, also delve into issues of retrospect, mentorship, and creative evolution. As The Assembly’s conversations with aging artists formed a cornerstone of the show’s developmental process, this plot device honors the piece’s early life even as it transcends it. Nick Benacerraf’s set, comprised mostly of crates out of which the characters unpack and repack art supplies, household staples, and personal possessions, similarly epitomizes the analysis and re-interpretation inherent in both artistry and remembrance.

Through the Halloways’ tale of grief and redemption, I Will Look Forward To This Later challenges us to view our lives in relation to those of our predecessors. How do their stories influence ours? Do we blindly follow traditions, actively defy them, or consciously choose which elements to keep or discard? And how will our current actions touch future generations? As The Assembly makes clear, we cannot sever ties with our past, but we can, with awareness and honesty, use it to build a better future.