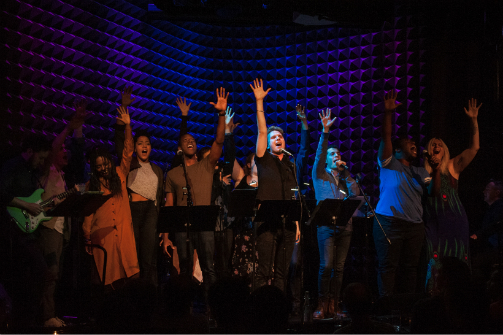 BOTTOM LINE: A delightful introduction to a composer who deserves to be on your radar.

If musical theater brings joy, then Sam Salmond is its newest ambassador. Clad in a sparkly purple blazer and a mile-wide smile, the 2016 Jonathan Larson Award recipient presented 16 songs from his repertoire in a celebratory concert on Wednesday at Joe's Pub. And the good times rolled.

Owning one’s awkwardness is a common theme in Salmond’s songs, seen in spades through his musical Uncool: the Party. Quirky ones like "Cigarette" (about trying to look cool smoking and failing) and "I'm Cool" (about convincing yourself that you've got this while you haplessly flirt with your crush) offer a playfulness that feels extremely relatable. And as sung by Barrett Wilbert Weed and Taylor Trensch, respectively, awkwardness has never been so endearing.

Salmond's explorations into the search for identity grow up in "Sunset on the Bang Saen," written for Shakina Nayfack for her show Manifest Pussy. A gritty ballad that isn't afraid to cut to its core, this haunting song effectively conveys the magnitude of the evening it describes. It was performed gorgeously by Nayfack, balancing subtlety and strength at the same time.

Many of Salmond's songs are instantly hummable, like "Twirl" and "Dance With Me." And there's disco influence in abundance so you'll also want to dance. The energy here is infectious. That said, Salmond's skill is at its most refined during his duets. His musical Eighty-Sixed – with book by Jeremy J. King – chronicles a gay couple in the middle of the AIDS crisis. "It Glows" and "Ignoring Truth" are beautiful peeks at intimacy with soaring emotion. Some of the most exciting moments of the evening came in the form of harmonies, in these songs as well as "Stand Alone," which – although much more upbeat in tone – includes a gorgeous four-part harmony toward the end (shout out to Salomon Lerner who provided the orchestrations). Another highlight was the soulful ballad "Sometimes Someone You Love," performed by the always incredible Julia Murney.

There's a beautiful honesty and generosity in Salmond’s work, making the audience feel as if they're a part of something together. He effectively channels his own enthusiasm through the music. The performers looked like they were having a great time and so were we. Salmond's talent shines through his music – I look forward to seeing what's in store for this young composer.

Introducing Sam Salmond was directed by Marlo Hunter and produced by Natasha Sinha. Assistant to the producer was Justice Longshore. Graphic designer was Nicholas Coburn.