I'll Say She Is

Original Book and Lyrics by Will B. Johnstone; Adapted and Expanded by Noah Diamond
Music by Tom Johnstone; Additional Music by Alexander Johnstone
Directed by Amanda Sisk
Presented by Gimme A Thrill Productions
Co-Produced by Trav. S.D.

Off Off Broadway, Musical Revival
Runs Through 7.2.16
The Connelly Theater, 220 East 4th Street 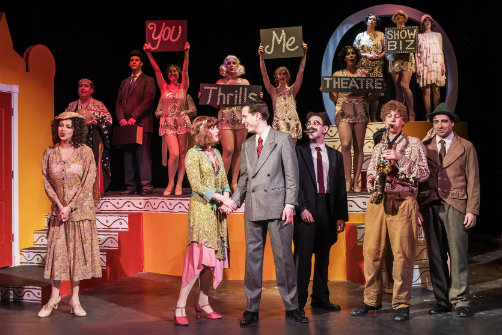 The Cast of I'll Say She Is. Photo by Stefan Timphus.

“Extra, Extra!” the headlines and newsboys scream as the lights go up, “Society Woman Craves Excitement!” Beauty (Melody Jane), a wealthy young heiress and “victim of suppressed desires,” has put out a call and a cash reward for any man who can “thrill” her—and the Marx Brothers are just the men for the task. Following its sensational 1924 Broadway release, the Marx Brothers’ debut musical I’ll Say She Is was largely lost to history, eclipsed by the popularity of such subsequent productions as The Cocoanuts and Animal Crackers. Building on the fragments of writer/lyricist Will B. Johnstone’s original rehearsal script, writer Noah Diamond and Gimme A Thrill Productions have adapted I’ll Say She Is for the modern stage, with this version marking the musical’s first full production since 1925. The result is a plot-light but hilarious revue, equally true to its source material and engaging to contemporary audiences.

At their agent's (Mark Weatherup, Jr.) behest, Groucho (Noah Diamond), Chico (Matt Roper), Harpo (Seth Shelden), and Zeppo (Matt Walters) descend upon the Park Avenue mansion of Beauty’s dowager aunt Ruby Mintworth (Kathy Biehl) and proceed to shock and delight the status quo with their antics. With the heiress’s heart—and the family silverware—in tow, the Brothers take Beauty and the audience on a madcap, thrill-seeking romp through 1920s-era New York. From the high-rolling heights of Wall Street to the seedy depths of Chinatown’s opium dens, the musical’s journey builds a charming-if-loose platform for the Marx Brothers’ trademark witticisms and slapstick sketches. One scene, in which a hypnotized Beauty imagines herself as Empress Josephine to Groucho’s Napoleon, brings especially big laughs: the remaining brothers scramble about as Josephine’s revolving-door retinue of lovers and erupt into a ludicrous sword-and-food-fight for her affections.

The cast and production team have clearly done their research, painstakingly capturing the Brothers’ iconic personalities and distinctive comedic rhythms. Marx Brothers aficionados will appreciate the leads’ spot-on impressions of their favorite clowns, particularly Shelden’s hyper-expressive, multi-instrumental Harpo. Yet, even those with little to no familiarity with the Marxes can enjoy the show’s daffy entertainment: at the performance I attended, school-aged children eagerly donned souvenir Groucho glasses and guffawed in sync with their grandparents.

The musical’s versatile ensemble contributes to its appeal. Shea Sullivan’s lively choreography highlights the chorus’ collective talents as well as individual members’ skills; soloists Dante Adela and Peyton Lustig are especially striking in a passionate Apache dance and several dreamy ballet sequences. Sabrina Chap’s musical arrangements serve a similar function as chorus girls delight us with ukulele serenades or back up the Brothers’ catchy songs with a three-piece brass set.

Despite the show’s homage to its era’s big-budget Broadway splendor, its strengths may be better suited to a larger venue. Full-cast numbers often appear cramped aboard the Connelly’s small stage, and its visible stagehands, despite Groucho’s sly jabs at “all these people dressed in black,” can prove distracting. Nonetheless, Diamond and Gimme A Thrill have unearthed a solidly entertaining gem, and I would be unsurprised to see I’ll Say She Is go on to grander incarnations. As the Brothers and company joyfully belt the closing number, we’re inclined to agree with Beauty that “there’s no greater thrill than the thrill of love”—or of a good musical comedy.

I’ll Say She Is is directed by Amanda Sisk and presented by Gimme a Thrill Productions. Consulting Producer is Trav S.D. Original Book and Lyrics by Will B. Johnstone; Adapted and Expanded by Noah Diamond. Music by Tom Johnstone; Additional Music by Alexander Johnstone. Musical Direction and Orchestration by Sabrina Chap. Choreography by Shea Sullivan. Scenic Construction by Joe Diamond. Costume Design by Julz Kroboth. Technical Direction and Lighting Design by Tom Biblia. Production Stage Manager is Sarah Lahue.