By Aaron Loeb; Directed by Josh Costello
Produced by The San Francisco Playhouse 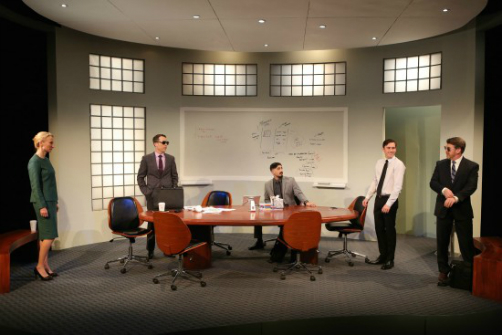 The cast of Ideation. Photo by Carol Rosegg.

BOTTOM LINE: When a group of high-powered corporate wonks converge for a strategy meeting to discuss how best to launch a top-secret project, the desired job security of each individual collides with the moral and ethical implications of what they’ve been asked to do. The result is both horrifying and amusing.

It’s called Project Senna, and The Company has called in its best-and-brightest to collaborate on  implementation. The team is male dominated, but highly experienced, and its members are not only familiar with one another, they have worked together successfully many times before.

It should have been business as usual, and initially, it was.

The work group consists of Hannah (Carrie Paff), Brock (Mark Anderson Phillips), Ted (Michael Ray Wisely), Sandeep (Jason Kapoor), and intern Scooter (Ben Euphrat in a small but pivotal role) and as they gather around a highly-polished wooden table in The Company board room, they’re told that they have just 90 minutes to brainstorm before they’re scheduled to deliver a coherent plan to their boss, JD.

Ted, the team manager, underscores the importance of the assignment, announcing that given the secrecy of the endeavor, electronic notetaking will be verboten. Instead, they’ll use a whiteboard to guarantee that the ideas they generate can be quickly erased to forestall any-and-all political backlash or fallout.

But what are they actually being asked to do? What is the scope of Project Senna? And why can’t they be told the name of the client that hired them?

As the murky details unfold, the team learns that their work is one piece of a much larger, and completely amorphous, undertaking. Their role, however, involves designing a system to dispose of millions of human bodies. Should they design crematoria? they wonder. How about piling the dead into containers and dumping them at sea? Would it make more sense to bury them in mass graves? Are there other options?

Early on, the group’s banter is witty and jokey, but as the implications of Project Senna begin to dawn, group members can’t help but question whether they’ve been asked to assist a benign government in containing a fast-spreading, lethal virus or are being asked to contribute to, and participate in, a Nazi-like holocaust. Or maybe, they reason, it’s a psychological test, a 21st century Milgram experiment to determine their loyalty to The Company and to each another.

As the characters ponder the implications of their conundrum—asking themselves whether they’re behaving like “good soldiers” in order to collect a handsome paycheck—they turn on one another. The result bounces between nervous hilarity and serious debate.

Sandeep, a Delhi born engineer in the US on a work visa, is the play’s conscience. For something like this-- whatever “this” is--to work, he begins, “everyone would have to keep it secret until…until it’s too late… To execute something of this scale—it’s impossible to keep it secret. And if people knew, someone would stop them…”

What’s more, he continues, genocidal policies tend to be directed toward reviled communities. “Against dissidents. Against people who look like me. Against Mexicans or gays or whomever they want to use it against, in the name of whatever they are doing things in the name of. Country? Profit? God? Well…those are the big three, aren’t they? It has happened many times in the history of the world. Is it that you think Americans are so uniquely good that they would never use such a plan?”

They’re provocative questions, albeit a bit heavy-handed, but they are the pivot around which Ideation revolves. Not surprisingly, the well-acted, well-written, and well-staged production offers no answers, but asks the audience to think about the role of the individual. Is it possible to isolate oneself from the bulk of humanity? Is a hefty paycheck protection enough from the world's ills? Can staying focused on a narrow task insulate workers from the implications of the job they’re doing? Is it possible to ignore how one’s work fits into a larger socio-political context? Does any of this matter?

The answers, of course, depend on one’s politics and perspective, but Ideation is to be credited for not shying away from big issues or big problems. Deeply engaging and unsettling—it is also bitingly funny—Loeb’s third play (he also wrote First Person Shooter and Abraham Lincoln’s Big, Gay Dance Party) zeroes in on issues that this year’s Presidential contenders would be wise to address. After all, will we be well-served by walls that keep people separated? Or are we part of a global, interdependent community where cooperation and transparency matter?