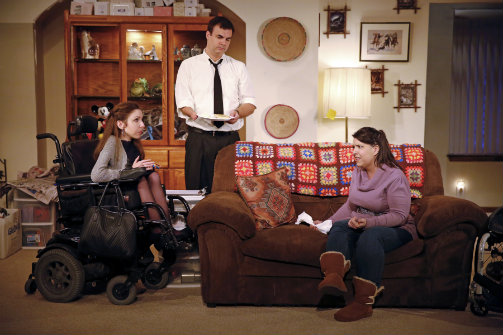 This past Broadway season, Spring Awakening made history by casting an actor in a wheelchair on Broadway for the first time. That production was performed in ASL and spoken English and employed many deaf actors. It was a big step for visibility of disabled and deaf actors, but there is still a lot of work to be done in terms of leveling the playing field. That's why it's important that Theater Breaking Through Barriers exists. Founded as Theater By The Blind in 1979, the company later expanded its mission to include artists with all disabilities. Samuel D. Hunter's The Healing is a TBTB commission and they, along with director Stella Powell-Jones, make an excellent team, resulting in a moving play that showcases a talented ensemble of actors.

Like all of Hunter's work, The Healing takes place in Idaho (here, a small town near Idaho Falls) and depicts how lonely it is to be a human. It is a particularly sad time, right after the funeral of a young woman in her thirties, Zoe. She doesn't have immediate family, so her friend Sharon (Shannon DeVido) paid for the funeral and is in the process of sorting through Zoe's possessions, with the help of some other mutual friends. Zoe was a fan of the shopping network and her house is cluttered with tchotchkes like Mickey Mouse memorabilia. (The excellent prop and set work by Charles Bowden and Jason Simms, respectively, is so evocative that you feel like you know who lives there before the play even begins.) As children, these friends spent every summer at a Christian Science camp, where they were told that they could pray their disabilities away. Obviously, that's left some scars.

One of the group, Bonnie (Jamie Petrone), brought her boyfriend Greg (John McGinty). He is an outsider, not only because he didn't go to their camp, but also because they are constantly excluding him from conversations, talking to each other without looking at him so he can read their lips. Just because they've been misunderstood for their disabilities doesn't exclude them from doing the same to others. Hunter doesn't just show these characters as one-dimensional people who had this horrible thing happen to them. They are flawed, like all people.

Hunter, as always, finds that perfect balance between humor and sadness that exists in life and the believable dialogue reflects that. At the performance I was at, I heard someone whisper, "That's not funny," when the audience would laugh. I've certainly been at plays where people chuckled at things I did not find amusing and maybe it wasn't this audience member's type of humor. I only bring it up because with serious/sensitive subject matter, people might be afraid to laugh and that's too bad because this play and the actors are very funny. For example, Bonnie is always making passive aggressive comments, like after Sharon and Donald (David Harrell) tell her that they are okay being single and she says, "I think you'll both find happiness someday." Lines like this are made even better by the natural way everyone in the cast has of delivering their lines.

The Healing is a true ensemble piece and it's difficult to single anyone out, but it's more Sharon's story than anyone else's. DeVido is hilarious, constantly making snarky comments and never hiding her disdain for the stupidity of others. But she is also heartbreaking, consumed with guilt and pain. The only one in the cast that I'd seen before is McGinty, but I hope to see them all again, not just at Theater Breaking Through Barriers, but at other theaters as well.

(The Healing plays at The Clurman Theatre at Theatre Row, 410 West 42nd Street, through July 16, 2016. The running time is 90 minutes with no intermission. Performances are Tuesdays and Wednesdays at 7, Thursdays and Fridays at 8, Saturdays at 3 and 8, and Sundays at 3. Tickets are $55 and are available at telecharge.com or by calling 212-239-6200. For more information visit tbtb.org.)

The Healing is by Samuel D. Hunter. Directed by Stella Powell-Jones. Set Design is by Jason Simms. Costume Design is by Christopher Metzger. Lighting Design is by Alejandro Fajardo. Sound Design is by Brandon Wolcott. Props Design is by Charles Bowden. Dramaturgy is by John M. Baker. Stage Manager is Anne Huston.