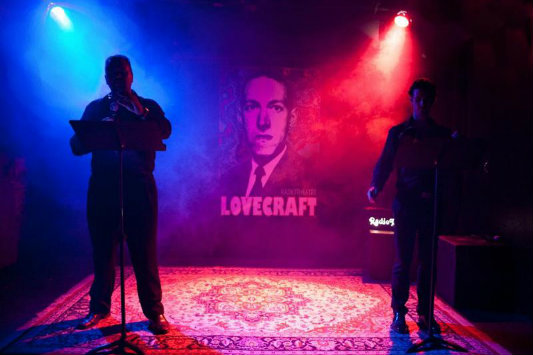 Frank Zilyini and Alejandro Lucian Cardozo in "The Beast in the Cave," H.P. Lovecraft Festival.

BOTTOM LINE: Well-imagined radio performances by masters of the radio-theatre craft celebrate Halloween with creepiness and subtlety, featuring tales of the weird in this cult classic festival.

H.P. Lovecraft fans, a tradition lives again: The 8th annual H.P. Lovecraft Festival is upon us. Horror radio fans, rejoice. In this festival of live radio performance, an expert cast performs two to three short stories per night (from a repertoire of eight) by 20th-century master of horror H.P. Lovecraft. On the night of writing, Radiotheatre performed "The Lurking Fear," "The Beast in the Cave," and "The Call of Cthulhu," with the overall selection spanning Lovecraft’s nearly-30-year career and including masterpieces "The Horror in the Museum" and "The Unnameable" alongside lighter fan favorites like "The Cats of Ulthar." The selections are paired along thematic lines—in the case of this trio, the theme of mysterious, grotesque creatures and a pervasive unknown.

Adapting prose text for the stage is always a challenge, and Lovecraft’s writing is particularly difficult, relying heavily on interior monologue and description with light character development. However, Radiotheatre’s thirteen seasons of experience in adaptation is clear, and the performance stays true to the text while adding texture and depth (and accents) to the characters. Writer/director (and Radiotheatre founder) Dan Bianchi’s deep passion for these tales sings through the adaptation and the man himself, who introduced the opening night performance in a Cthulhu-themed Christmas sweater. Die-hard fans of the original texts will find the stories shortened and a bit livelier, but entirely true to form.

In "The Lurking Fear," a team of explorers journey to the abandoned, isolated Martense mansion, which has been blamed for mysterious events in the surrounding town. The mansion acquired a reputation for containing a destructive horror when an aristocratic family locked themselves away from the world following the murder of a family member, and rumors of incest and cannibalism ensued. After two of his companions (Frank Zilyini and Alejandro Lucian Cardozo) disappear, then are found frozen and mutilated, the unnamed professor (R. Patrick Alberty) leading the investigation begins obsessively searching for the deformed, degenerated horror lurking in the Martense mansion. Alberty carries the tale, moving from bumbling to giggling madness with excellent pacing drawn from his extensive experience with Radiotheatre.

"The Beast in the Cave," one of Lovecraft’s first and shortest stories, follows a cave tourist (Cardozo) who becomes lost and encounters an unnamed, pale creature ending in a fight to the death. New company member Cardozo brings a rich characterization to an otherwise one-note and abrupt tale, mixing gusto, terror, and panicked Spanish for an exciting interlude, making the story an unexpected high point.

Finally, no Lovecraft lineup would be complete without the classic "The Call of Cthulhu," one of Lovecraft’s latest and most renowned works. An explorer (Zilyini) returns to a professor (Alberty) with a mysterious artifact taken from a Haitian cult, appearing to depict a squid-like monster with wings the cult worshipped. After hearing the explorer’s tale of slaughtering the Haitians, the professor tells the story of ancient Cthulhu, destroyer of worlds from the stars, who waits, dreaming, beneath the sea of Earth. The two mount an expedition to find the god’s hiding place, and unleash a terrible evil in their ignorance. Zilyini and Alberty do great justice to the characters that established these major horror tropes, and the adaptation’s pacing cleverly updates the slower moments of the original text for the stage.

Most Lovecraft tales have recognizable, even repetitive, plot elements—there is often an academic studying weird goings-on, an abandoned and remote location, an "unspeakable" horror or lurking unknown. The performers lean in to the stories’ sometimes clichéd characters and play the coterie of haunted professors and traumatized explorers with old-timey flair. Timing is excellent and, though I expected to see live-produced Foley sound, the recorded sound design is richly textured with Hitchcock-era classic horror vibes. The sound was a bit quiet, and missed a couple opportunities for jump scares, but the creepiness factor is frighteningly consistent.

The production isn’t flashy, but the devil is in the details. Actors perform at music stands, the sole backdrop a psychedelic tapestry of Lovecraft’s portrait. The subtle and perfectly-timed lighting textures the stage and builds suspense, and makes excellent use of angles—think upside-down flashlight spooky. The backdrop’s eyes seemed to move at tense moments…whether due to my imagination or a clever theatrical trick, it’s hard to say.

Make no mistake, this is a cult classic production, full of the kinds of subtle nods that fans of the weird tales of Lovecraft’s mythos crave. Consequently, this production primarily appeals to those already familiar with H.P. Lovecraft’s short stories, and those passionate about the subtle craft of radio performance will also feel hideously at home.

(Radiotheatre H.P. Lovecraft Festival plays at the Kraine Theater, 85 West 4th Street, through October 30, 2016. The running time is approximately one hour 30 minutes with no intermission. Performances are Thursdays, Fridays, and Saturdays at 8; and Sundays at 3. Tickets are $30 ($15 for students) and are available at horsetrade.info. For more information visit radiotheatrenyc.com.)