By Henrik Ibsen; Adapted and Directed by Fergus Scully
Produced by The Instigators 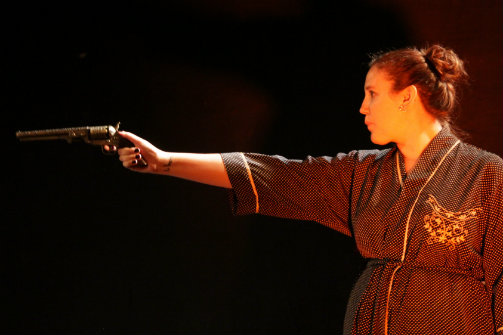 BOTTOM LINE: Actors act to their hearts' content in this classic drama every diva dreams of doing.

Something isn’t right with the Tesmans.

If you did not read Hedda Gabler in school, or you did not have a theater major roommate in college fantasize about playing this over-the-top part, then allow me fill you in: Hedda Gabler (Dana Saffran) is newly married to George Tesman (Taylor Petracek), a dull but sweet professor longing for glory. She learns that her childhood acquaintance, Thea Elvsted (Jenna Sander), has left her husband for the mysterious Eilert Lövborg (Laird Reghenas)—who was once in love with Hedda. Over the course of a debaucherous evening, Hedda convinces Lövborg to kill himself—to “die gloriously”—with her own gun. Hedda then meets her end at her own hand under the threat of exposure by the slimy Judge Brack (Mark Couchot).

I want to commend these actors for their passion. Hedda Gabler is tough—long and potentially tedious, but with meaty opportunities for an actor’s finesse to shine. Dana Saffran is strategic in her biting resolve as Hedda—a dream role for many an actress—and the clear standout in this uneven cast. As Berta, Isabel Cade's unwavering commitment to her physicality was quite funny. But while I admire the palpable joy these artists seem to possess for their work in this play, they possess so much passion that it feels like they are quite literally acting for their lives. The ensemble also performs a kind of mouth-music that comes off more as a sound effect—it's used to underscore tough conflicts, dramatic moments, and some entrances and exits. This device might have been more effective had the effect been less dissonant, and more musical.

I understand why Hedda Gabler is a favorite play for theatre folk—there are four indie theatre productions this fall alone. But because it is so ubiquitous, it can be difficult to do a production that feels fresh, daring, and necessary. Fergus Scully, this production's director and adaptor, has clearly tried to infuse new life into his adaptation, but perhaps an edited (that is, shorter) version would have helped to better channel his actors' passion for the material. The production was also hampered by some production oversights—a longer than estimated run time, stray cables across the only exit for the audience, cell phones falling out of actors' pockets—that, while perhaps understandable off off Broadway, are signs of an inexperienced company.

The Instigators—the company producing this Hedda Gabler (in repertory with Wilde's The Importance of Being Earnest)—is a group of actors dedicated to the classics but, according to their mission, also open to new work. I really hope this company pursues such new work, since it might be that old chestnuts like Hedda Gabler don't mesh well with the energy and passion of these vibrant young actors. There is a lot of promise on the stage of Long Island City's Secret Theatre (a beautiful space)—here's hoping this company of eager artists continues to find their voice.

(Hedda Gabler plays at the Secret Theatre, 44-02 23rd Street in Queens, through October 16, 2016. The running time is just under three hours with an intermission. Remaining performances are Friday at 7:30 and Sunday at 3. Tickets are $18, $13 for students/seniors/under 35 and are available at  brownpapertickets.com. For more information visit secrettheatre.com.)

Hedda Gabler is by Henrik Ibsen, adapted and directed by Fergus Scully.