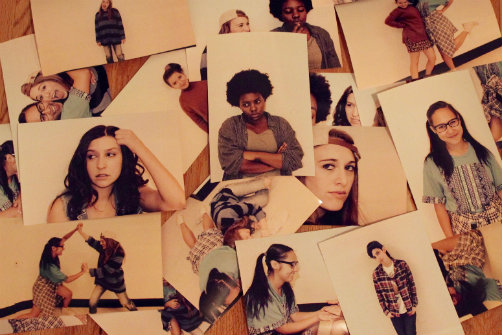 (Note: the play here reviewed is based on a famous event, and as such I will be discussing the general details of the incident. If you would like to go into the show completely blind, skip the first paragraph).

Hazelwood Jr. High is based on the shocking true story of the murder of twelve-year-old Shanda Sharer by four of her classmates. The cast is small, with the entire story centering around just six characters. We begin with Shanda (Eve Kummer-Landau) about to entire junior high school, excited to enter the alluring world of teenage life. On her first day, she meets Amanda (Bear Spiegel) and they hit it off. Soon, they are romantically involved. The trouble is, Amanda is also dating the jealous, vengeful Melinda (Patricia Yeazell). Shanda and Amanda go to the school dance together, and sneak off to a nearby graveyard to have sex. They are spotted. Melinda is furious, and word also gets back to Shanda’s mother, who sends her to a Catholic school to insulate her from troublemakers. Amanda and Shanda’s relationship does not cease, however, and soon Melinda hatches a plan to make Amanda hers, with the help of her friends Hope (Sofie Zamchick) and Toni (Marielle Young), as well as the mysterious loner Laurie (Kristin Dawn-Dumas).

The original production played at Lincoln Center and starred Chloe Sevigny. Cupcake Lady Productions’ take, directed by Sean Pollock, is a decidedly smaller, more intimate affair. There are about fifteen seats, in two rows back to back. It an immersive experience, at times uncomfortably so. The actors surround the audience. At times, we have to crane our heads to see what is happening. At other moments, the actors are comfortably in view. This produces an effect where we, the audience, feel as though we are seeing something we are not supposed to. It's an interesting combination of self-consciousness and audience complicity: when we crane our necks to see what is happening, we are making a conscious choice to continue. Lighting and music are handled by crew members sitting in the corners of the room, who manually plug and unplug different units from power strips taped to the wall. It’s a daring, minimal, DIY set-up, one entirely focused on utility, rather than artifice. There’s a humanity and vulnerability to this approach that I appreciate.

Hazelwood Jr. High is unquestionably a heavy watch. I (fortunately or not) didn’t know anything about the real life case of Shanda Sharer before seeing the show, and I found the play’s back half shockingly dark and ugly. If this subject matter sounds upsetting, it might be best to stay away, as the show pulls no punches. The cast is uniformly solid, with everyone getting their moment to shine. Most consistently stunning is Patricia Yeazell as the conniving, abusive Melinda. She is, in no uncertain terms, a monster, but Yeazell brings humanity to the role as well.

Urbinati’s play is a fascinating journey into the darkness right under the surface of middle American life. It’s not for everyone, but those open to the experience will find a memorable, worthwhile experience.

(Hazelwood Jr. High plays at the Mayday Space Classrooms, 176 St. Nicholas Avenue, 2nd floor, through November 20, 2016. The running time is one hour and thirty minutes with no intermission. Performances are Fridays at 8; Saturdays and Sundays at 7:30. Suggested donation of $10. Tickets are available at cupcakeladyproductions.com.)