Written and Directed by Toshiki Okada
Presented by Japan Society, as part of The Public Theater's Under the Radar Festival 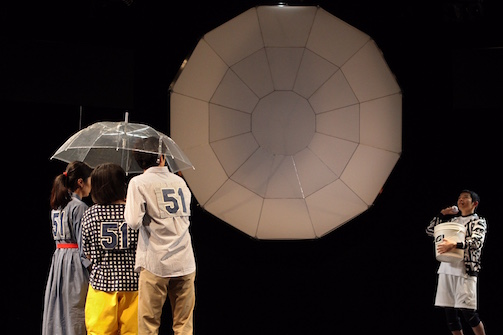 BOTTOM LINE:  A lengthy parable about the influence of America’s pastime in Japan and Korea.

God Bless Baseball by playwright and director Toshiba Okada is an allegory which uses baseball as a vehicle to address the controversial history between Japan and Korea. Performers Sung Hee Wi and Aoi Nozu are presented as two childlike personifications of Japan and Korea, utterly confused and disinterested in learning the sport of baseball. They take turns humorously lamenting to performer Yoon Jae Lee, a teacher figure, about the pointlessness of baseball and how it is impossible to understand. Lee persistently tries to explain the mechanics of baseball, but ultimately gives up and admits that he doesn’t even like the sport to begin with. Later, performer Pijin Neji enters as Ichiro Suzuki and through a Butoh-like movement piece, teaches the others about how to become one with the bat and then how to release yourself from it completely. It is here that the relationship shifts and Ichiro becomes almost a tormentor of the three, encouraging that they follow his instruction regardless of their personal feelings.

Performed almost entirely in Japanese and Korean, the physical elements of Tadasu Takamine’s set are helpful visual guides for those who don't speak the languages. The two black translation screens to the right and left of upstage allow the audience to follow the story, and the baseball diamond on stage helps ground the story in a physical place. Further, a large white umbrella-shaped screen looms in the background and talks to the players in English, symbolic of America watching over the two countries.

The production has some stunning theatrical elements; however, at an hour and forty minutes, the high points are overshadowed by slow pacing and fact-heavy dialogue. Additionally, with the height of the translation screens and the rapid nature of the translations, the audience is torn between watching the action and reading along for comprehension. Overall, the actors were extremely focused and fully committed to delivering this intentionally poignant piece, but unfortunately much of the meaning was lost in translation.

God Bless Baseball is a complex endeavor with light humor, striking physical moments and a deep understanding of baseball’s farther reaching influence in both countries.