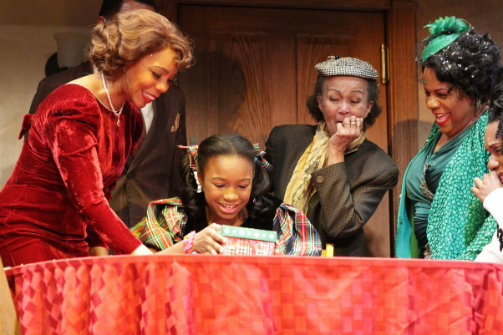 BOTTOM LINE: The First Noel is a timely and joyful reminder of the importance of family and the healing power of the holiday spirit.

The First Noel is a heartfelt family musical that’s hopefully on its way to becoming the newest holiday classic of the repertoire. If you’re yearning for a Christmas story that exudes an authentic New York vibe, then this is the one for you. Did I mention it’s running at the legendary Apollo Theater? It doesn’t get more New York than that! With reinterpretations of traditional Christmas carols, original musical theatre ballads, and an exceptional gospel choir, The First Noel is a gift and an opportunity to reflect on how we treat each other and the significance of our actions.

It’s Christmas Eve and thirty-something Noel (a grounded and affective Ashley Ware Jenkins) begrudgingly returns home to Harlem for her mother’s funeral. Intending to sell the family brownstone for, thanks to gentrification, a small fortune, she pays the house one last visit. As she steps foot into the foyer, painful memories of her childhood flood her mind and the stage in a series of flashback scenes—rewinding back to 1985, when she was just 9 years old. Her parents struggle to move on from the death of their first-born, particularly her mother Deloris (the glorious songbird, Soara-Joye Ross). She is so intensely consumed by grief that there is an anti-Christmas and no-fun policy in the house; the family spends the day honoring their former daughter at the cemetery instead. All young Noel (the energetic and talented Nia Bonita Caesar) wants this year is a real Christmas, but it won’t come easy.  When her showstopping estranged grandmother Ethel (soulful Tina Fabrique) arrives unannounced, the three generations are challenged to come to terms with their past and make amends—or else.

At this time of year, it's easy to forget that this is not "the most wonderful time of the year" for everyone, and unlike more typical holiday shows, The First Noel refreshingly embraces this reality. But while the plot is heart-wrenching, there are plenty of smile-inducing and chuckle-worthy numbers that keep the energy ultimately upbeat. As televangelist Benny Raindrop, Mykal Kilgore brings down the house with laughter during his delightfully spot-on church performance. And the vibrant 80s fashion and high-voltage dance routines break up the more poignantly sad scenes and numbers. There is a truthfulness and relatability to each character that makes for a cathartic experience. Each of the main characters—Noel, Deloris, Ethel, and Noel’s father Henry (Ken Robinson)—are dynamic and fully-developed, real people. It would perhaps be easy to vilify Deloris for neglecting her daughter, or Ethel for not being there for her daughter when Deloris needed her the most. However, each is validated in their own right, and that’s due to the tremendously honest performances and the thematic depth of the music and lyrics by Lelund Durond Thompson and Jason Michael Webb.

Under the nuanced direction of Steve H. Broadnax, The First Noel has the perfect balance of drama and light-hearted cheer that are the foundations of the most treasured holiday classics. It’ll break your heart, then have you rejoicing in applause five minutes later. In many ways, the rollercoaster ride mimics what it’s like to be a part of family. It’s hard work! There are thrilling ups and shocking downs, surprising flips and jarring turns; but you only get one and it’s up to you to make the most of it.

The First Noel is by Lelund Durond Thompson and Jason Michael Webb. Directed by Steve H. Broadnax, III. Choreography is by Brian Harlan Brooks. Music Direction is by Andrew Lederman. Orchestrations are by Jason Michael Weber. Set Design is by Daniel Robinson. Costume Design is by Rachel Dozier-Ezell. Lighting Design is by Alan C. Edwards. Sound and Projection Design is by Curtis Craig. Dramaturg is Arminda Thomas. Stage Manager is William V. Carlton.