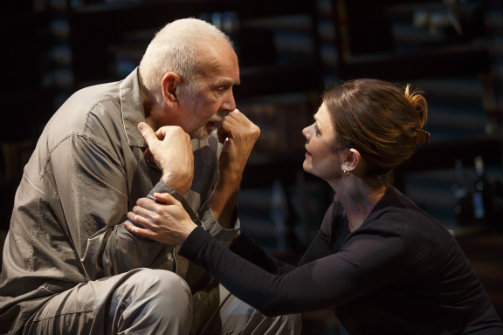 Frank Langella and Kathryn Erbe in The Father. Photo by Joan Marcus.

BOTTOM LINE: The fragility of the human mind is on display in this disorienting new French import.

According to the World Health Organization, 47.5 million people worldwide suffer from dementia. With 7.7 million new cases each year, more people than ever are feeling the strain of taking care of loved ones with the condition or dealing with it themselves. As a rare disorder that takes hold of both body and mind, it can tear families apart, rendering relations incapable of empathy and raising troubling questions of responsibility and blame.

These questions take center stage in The Father, a complex new drama now playing at Broadway’s Samuel J. Friedman Theatre. The play’s subject is Andre (three-time Tony winner Frank Langella), the aging patriarch of a Parisian family whose mental state has declined to the point where he needs live-in help. Unfortunately for his adult daughter, Anne (Katherine Erbe), and her husband, Pierre (Brian Avers), Andre’s recent behavior has made it impossible to keep anyone on. The play opens with Anne confronting him after he (quite literally) chased off his last nurse (with a curtain rod). What begins as a seemingly straightforward, naturalistic take on an increasingly common familial struggle quickly takes a turn, however, as it becomes clear the action is unfolding from Andre’s perspective (or some permutation of it). Playwright Florian Zeller, recipient of Molière awards (France’s equivalent of the Tonys) for The Father and for his 2011 companion piece about depression, The Mother, seems determined to utilize his protagonist’s Achilles heel to subvert his audience’s expectations. We see everything through Andre’s eyes, and he is far from a perfect narrator. His confusion about time, place, and identity manifests itself as unclear, repetitive conversations and multiple actors playing the same character. In his smart and original script, Zeller keenly balances the audience’s understanding of the events of the play with Andre’s understanding (or lack thereof) of the events unfolding around him. Thus, we not only see the story of a man losing his faculties, but feel it as well, as if we were going through the same thing.

Throughout the play’s 90 intermission-less minutes, those in attendance are plunged ever deeper into the recesses of Andre’s mind. As vignettes from his life whiz by in nonlinear, impressionistic fashion, we see the old man run the gamut from obstinacy to weakness to rage, often without warning. Routines as benign as dressing or eating take on an outsize and even sinister import as the walls of Andre’s psyche close in around him. To further illustrate this effect, blackouts between scenes are punctuated by haunting music and flashing white lights reminiscent of firing neurons. This clever bit of brain-inspired stagecraft connects even the play’s moments of necessary dormancy to whatever bout of decline or difficulty may unfold next.

As one might expect when a titan of the American theater is involved, The Father serves as a vehicle for Frank Langella’s considerable talents. His booming voice and weighty aspect imbue Andre with a necessary strength, making it all the more painful to witness this formerly proud man descend into impotence. He is surrounded by an able cast of younger actors, five in all, who exhibit some emotional depth but more than anything represent the oblique facets of Andre’s world. Anne, played by Katherine Erbe, is his voice of reason; Laura, played by Hannah Cabell, his patronizing interloper; and Pierre, played by Charles Borland, his violent nemesis. When the actors change characters, their functions change accordingly, further exacerbating the effect of their fluid identities on Andre’s already fragile mind.

Though Zeller’s play is primarily concerned with said mind, the most affecting part of his work is its treatment of those on the outside looking in. In Anne, we see a grown woman attempting to reconcile her fealty to her father with her own wants and needs. She cancels trips to be with Andre and spends considerable time and money trying to find a suitable aide, straining her tenuous relationship with her partner and driving her to a psychiatrist’s couch. Though Andre’s is the noble mind here o’erthrown, Anne’s is on the brink. She is faced with a heartbreaking tug of war between her intellectual understanding of what’s best for her father and her emotional attachment to the man he used to be. And the scariest part: she could easily be any one of us.

Though far from uplifting, The Father is a refreshing addition to the current Broadway scene—a one-set, low-fi, actor-driven exploration of an uncomfortable human truth. The script is at times very French (i.e. stilted and detached) in its dialogue between characters, but Oscar-winner Christopher Hampton’s translation provides ample room for Langella and his supporting cast to maneuver. Alongside a palpable sympathy for a doomed family and its patriarch, The Father is likely to elicit plenty of self-reflection. As America’s Baby Boomers grow older and their children come of age, both groups will increasingly look to art for some means of coping with what lies ahead. Using innovative storytelling to touch on familiar themes, Zeller has has endeavored to give them just that. It may not be pleasant, and at times can be downright painful…but whether we choose to face it or not, it’s not going away.

(The Father plays at The Samuel J. Friedman Theater, 261 West 47th Street, through June 19, 2016. Performances are Tuesday and Wednesdays at 7 and Thursdays through Saturdays at 8, with matinees Wednesday, Saturday and Sunday at 2. Tickets are $70-$150 and are available at telecharge.com or by calling 212.239.6200.)

The Father is written by Florian Zeller, translated by Christopher Hampton, and directed by Doug Hughes. It is produced by Manhattan Theatre Club, by special arrangement with Theatre Royal Bath Productions. Scenic design is by Scott Pask. Lighting design is by Donald Holder. Costume design is by Catherine Zuber. Original music and sound design are by Fritz Patton. Illusion consultant is by Jim Steinmeyer. Production stage manager is James FitzSimmons.