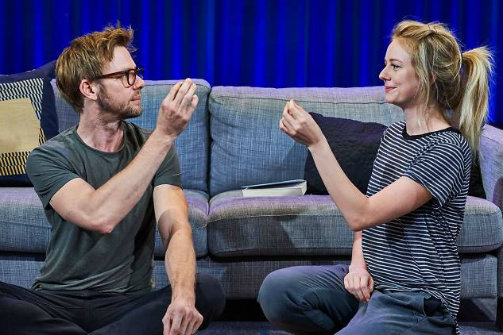 BOTTOM LINE: Empathitrax imagines the impact of pharmaceutically created empathy, asking us how far we are willing to go for love.

Imagine popping a pill and being able to feel genuine empathy with a single touch. The titular miracle drug at the center of Ana Nogueria’s new play Empathitrax enables its users to experience heightened sensory perception and the ability to feel another person’s emotions by simply touching them. Side effects include euphoria, alienation, and a powerful window into the complexity of what it means to love.

Struggling to overcome a difficult period in their relationship, long-term partners Her (Justine Lupe) and Him (Jimmi Simpson) are presented with the opportunity for pharmaceutical intimacy as an answer to their shared sense of isolation. As explained by the unbelievably cheerful “pharmaceutical sommelier” Joe (a brilliantly comedic Genesis Oliver), the drug promises the couple an opportunity to really get to understand each other through sharing emotions, memories, and sensations. This permeability becomes more than either of them bargained for, and it nearly destroys them both.

Empathitrax asks a number of questions, focusing most pressingly on “how much work is too much work” to make a relationship last. Over the course of the show, we come to understand the source of the squabbling couple’s deeper issue—one of the partners is clinically depressed. Told with darkly funny storytelling, the show is also inquisitive, comfortably letting questions linger in the air, unanswered. Mental illness is presented as an aspect of Her personality that must be contended with as a part of the wholeness of Her true self. This challenges the belief that everything can be cured or that every pain should be fixed.

The play also does a good job of highlighting how we already exist in a reality where taking a pill can result in experiencing the world differently. Critically exposing the arbitrary distinctions between pharmaceuticals and recreational drugs (there are multiple lines about how to use the medicine in the “right” way), Empathitrax also raises questions about how much transparency one should have about existing with heightened abilities or altered perception.

Olivier, doing double duty as both the Empithitrax salesman and the best friend of Him, is a bright force in the show and gives a performance full of small moments of hilarious idiosyncrasies. He serves as a valuable centered force in a show focused on two such frenetic energies. As Her and Him, both Lupe and Simpson bring a nervous intensity to their performances. Simpson, who heavily utilizes his glasses and desperate hand gestures to convey a kind of cerebral morality that is constantly analyzing, is convincingly both endearing and selfish. As he struggles to be a worthy partner, he seems increasingly beleaguered, tired by the emotional weight. Lupe does a similarly beautiful job of showing her character’s cracks, eventually crashing so sincerely and completely that one worries she will never recover. She is also sharply comedic, burnishing a caustic humor that is wickedly pointed. Speaking directly to their dog, Lupe has a lovely meditation on mental health, drawing thoughtful comparisons of the effects of anti-depressant drugs with the impact of Empathitrax. She longs to feel everything (“To have everything feel new all the time”), the good and the bad, but is also at the whim of her medical cocktail.

Unfortunately, there is a particular irony in the fact that the show sometimes struggles to make the audience feel the intensity of the character’s emotions. One example is the long, awkward conversation two characters have while waiting in line for the bathroom at a party. Ana Nogueria’s lines, which can be effortlessly smooth, here sound bulky and rely too much on extrapolation to explain the main character’s deep depressive episodes. Though both actors commit beautifully to the moment, it is frustrating to anticipate the emotional turns so accurately, thus robbing the moment of authenticity.

The absolutely stunning lighting design by Grant Yaeger casts an atmospheric pall over the show that edges on cinematic—appropriate, perhaps, as both leads are best known for their television and film work. A spare, minimalist apartment set, designed by Reid Thompson and set into a deep recess, also suggests a sitcom viewed through a television screen. Often, the show feels like an optimistic pharmaceutical commercial gone horribly, darkly wrong. As the couple’s hope for their prospects crumble, the white walls and carpeting feel more and more like a prison.

Director Adrienne Campbell-Holt, founding artistic director of Colt Coeur, has seamlessly integrated sound design (Matt Otto) and lighting to evoke contrasting moments of expansiveness and claustrophobia. In the beautifully redemptive and sweetly funny final moments of the show, the aspects of design come together magically, creating an incredible moment of deep emotion. Beyond words, we transcend understanding and simply feel.

(Empathitrax plays at HERE, 145 Sixth Avenue, through October 1, 2016. The running time is ninety minutes with no intermission. Performances are Thursdays through Saturdays at 8:30; and Sundays and Mondays at 7. There is also a performance on Saturday 10/1 at 4. Tickets are $18 and are available at here.org or by calling 212.352.3101.)

The cast is Justine Lupe, Jimmi Simpson, and Genesis Olivier.