Off Off Broadway, Play
Runs through 2.27.16
The Brick Theater, 579 Metropolitan Ave, Brooklyn 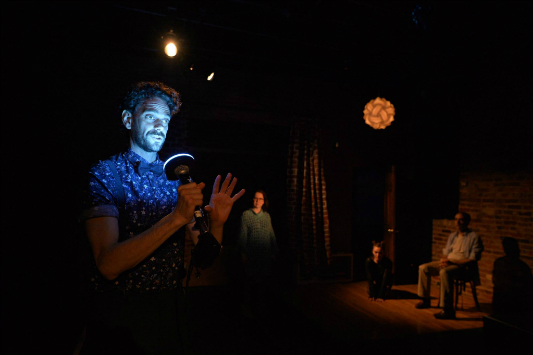 BOTTOM LINE: Ninety-minutes of obscurity wrapped in charm, with squirrels.

Although I was saying to myself “what the fuck is going on here?” for the majority of Human Head's Due To Events by Jean Ann Douglass and Eric John Meyer, I did not leave the theater completely perplexed. This comfortably confusing dark comedy is an existential rumination on solitude, squirrels, cats, and the epic journey that can happen within one’s apartment. While nothing is resolved and an eclectic variety of ways to pass the time within one’s home is showcased, it isn’t an entirely unfulfilling experience. With the audience laughing and “hmm’ing” in all the right places, Due To Events finds a unique groove before it ends as abruptly as it begins.

Hero (Anne Gridley) is placed on house-arrest after some undisclosed—potential anti-establishment—crime she is accused of committing. Her first step in vindicating herself is to elicit the help of her Lawyer (Ben Beckley) to pursue a mystery-man, Dan, who might hold the key to her acquittal. While the Lawyer is on a worldwide man-hunt, the powers that be, who at times double as a Voiceover narrator (David Skeist) instruct Hero to stay put and, if she needs anything, to make any requests for supplies, such as food and the like, by speaking into a taxidermy squirrel. Also, there’s a Cat (Laura Campbell). Played with grace, campiness and commitment, Campbell's Cat now faces a crisis of identity as she considers her purpose in life: laying around the house with her master, the Hero. Can they both do nothing in the apartment together? Slowly they learn, and perhaps even write a play, about how to be lonely with someone else near you.

Due To Events delves into the obscure regions of the mind. Do loneliness and isolation shape the way we perceive reality, or are they just disposable social constructs? In the fashion of Sam Shepard’s Suicide in B-flat, Due To Events evokes the state of a waking dream: surreal sound effects by music/sound designer Chris Chappell envelop the action that plays out across a distorted pseudo-realistic set by scenic/costume designer Sara C. Walsh. The characters rattle off banter laden with circular logic, non-sequiturs, and dream references. Through the hour and a half of Due To Events you will at times enjoy Campbell's excellent Cat beat poetry set to a jazz-ified version of the ‘Meow Mix’ jingle, and you might find yourself feeling transported to some smoky realm by Skeist’s magnetic voiceover narration that's equal parts self-guided meditation and a Tom Waits daydream.

I can’t tell whether the play wants to finish off any of its tangential story-lines, to tie up and make a concrete point, or whether all of the action of Due To Events is meant to meander in ever evolving ambiguity. Somewhere between the writing and the direction, Douglass and Meyer are missing something. There can be a bolder push to drive the play into abject obscurity or instead to guide towards a revelatory resolution. Due To Events plods the fuzzy line somewhere in between these two outcomes, and at times, wallows in moments of self-involved tedium.

(Due To Events plays at The Brick Theater, 579 Metropolitan Ave in Brooklyn, through February 27, 2016. The running time is approximately 90 minutes with no intermission. Performances are Wednesdays, Thursdays, Fridays, and Saturdays at 8. Tickets are $18 and are available duetoevents.com.)

Due To Events is written and directed by Jean Ann Douglass and Eric John Meyer. Set and Costume Design is by Sara C. Walsh. Lighting Design is by Simon Harding. Music and Sound Design is by Chris Chappell. Stage Manager is Kate Shelton.