Di and Viv and Rose 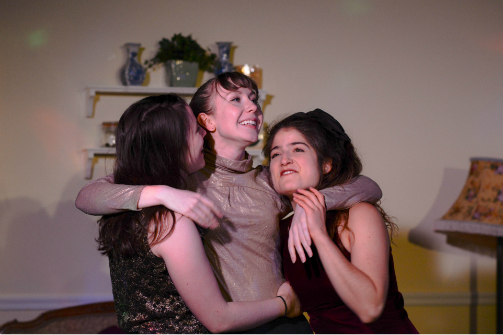 BOTTOM LINE: An unabashed but honest love letter to female friendships and womanhood, Di and Viv and Rose is a triumph in storytelling.

In Amelia Bullmore’s Di and Viv and Rose, which is currently making its US premiere at Studio Theatre at Theater Row, three dissimilar women meet in college and move in together, creating a bond that feels closer than just kindred spirits. As a member of the audience—particularly as a woman—that feeling doesn’t just stay within the confines of the script or the actors. It feels familiar, like home.

Off to university and away from home for the first time in their lives, Di (Olivia Levine), Viv (Raven Pierson) and Rose (Leslie Erin Roth)—three women from three opposite corners of England—form a complicated friendship and move into a flat together. From personality to sexuality to dress, they are as recognizable as you can get without becoming caricatures. Di is a sporty lesbian still keeping her sexuality a secret from her mother. Viv is a sociology student who dresses modestly and tends to overanalyze a bit of everything. And Rose is a social butterfly who “enjoys so many things you think it’s an act” and has had her sexual awakening since going off to school. But in their new home on Mossbank Road, they form a bond despite and because of their differences.

Written by Bullmore and directed by Leta Tremblay, Di and Viv and Rose is a clever, comical and honest play about the ups and downs of friendship, especially when under the same roof and even years later when you’ve moved out from under it. It takes place over the course of 27 years, from 1983 to 2010, through school, marriages, divorces, illnesses, children, dogs, successes, doubts and deaths.

Twenty-seven years in the course of 130 minutes should feel like too much, especially with only hair and costume changes to aide the imagination, but there is no doubt in this script and no doubt in the performances, by actresses who shine spectacularly through each year. Occasionally, you feel like you are watching a movie, unrelenting and edited so finely (complete with musical soundtrack), particularly its introduction of micro-scenes throughout Di, Viv and Rose’s first year of university, showing glimpses into their personalities, how they met, how they receive each other and how they came to live together at Mossbank, all before segueing into the three of them unpacking their new home, music blasting on the stereo as everything falls into place.

Women are so often pit against each other and made to see each other as competition, through love, through work and through life overall. To say it is refreshing to see a show where the female friendship is the focus is an understatement, especially one done so well, so believably and so uncompromisingly. Especially early on in the show, each of the women shine a light on their home lives, complicated relationships with parents and step-parents, aspects of their private lives they’re not willing to divulge to blood relatives. But Di and Viv and Rose have chosen each other, made each other their family and created a level of trust that should be valued. And in doing so, what results for us to see is a triumph in storytelling of “friendship's impact on life and life's impact on friendship.”

That bond is formed as a result of witnessing not only the joys of life, but the messiest, most grotesque and violent acts. The announcement prior to the beginning of Di and Viv and Rose is not just a content/trigger warning; it sets up expectations and an internal battle you were not anticipating to have. You meet the characters and learn about their personalities early on and then the question creeps into your head in the dark: Who does this terrible act happen to? Until it occurs, it is hanging in the air. It is the elephant in the room. It is always the elephant in the room.

But it is not the shocker of the show; it is not meant to be. There is no big reveal or cut to black at intermission; instead, in what is one of the show’s most powerful scenes, the victim’s mattress is carried out into the living room and the living room is disassembled, cushions on the floor, blankets strewn over chairs, so all three friends can sleep together that night. The victim debates whether or not she wants to report the rape, which happens in the middle of the night when she is asleep and her rapist breaks in. She debates whether she wants to go to counseling. The women continue to grow. News is revealed and secrets are revealed. They see the house in Mossbank and move away. Life continues. It is an event that occurs and is dealt with and ultimately passes, wounds patched up but scars still there.

The sexual violence, the recovery process, the fear of not being believed, they are all featured here as consequence because it is a show about women and about being a woman. It is about how we present ourselves to the world, including how we dress ourselves, the boulder-like challenges, and the normal things that stop us from living our lives. It is a story about female friendships and support systems, and it is told with love. It is, itself, a love letter to women, to being a woman, and to being friends with women. It is unabashedly pro-women and beautifully so.

Di and Viv and Rose is written by Amelia Bullmore and directed by Leta Tremblay. Scenic Design and Lighting Design is by Reilly Horan. Costume Design is by Alice Wang. Dramaturgy is by Mirirai Sithole. Dialect Coaching is by Amanda Quaid. Acting Coaching is by Misha Calvert.