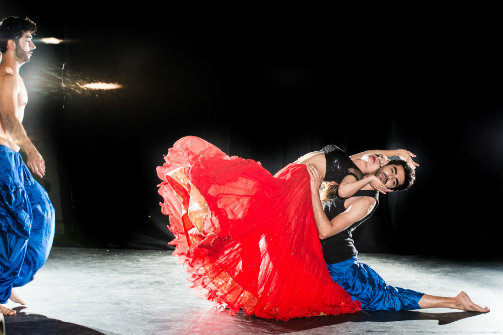 A scene from Devdas.

BOTTOM LINE: Devdas tells a story of heartbreak and triumph through the medium of contemporary ballet while celebrating Indian culture.

The contemporary ballet piece Devdas takes the classic Indian love story, compete with competition and forbidden love, and puts in in the modern setting of a reality competition show. The story begins with Paro (Shivani Badghi) and her lover Devdas (Aditya Madiraju), two people seemingly in a pure, loving relationship, traveling to audition for the popular reality show India’s Dancing Star. They are joined by the ensemble for the first movement piece excellently depicting a realistic subway journey using only their bodies. Though the ensemble pieces are mesmerizing, Badghi and Madiraju’s chemistry shines though it all.

Once Paro and Devdas reach the competition (marked by a change in projections against the back wall of the stage), Chunni Babu (Sankalp Sharma) emerges as the electric host of the dance show, constantly observing the skills of the competitors (Badghi and Madiraju joined by the ensemble) as they perform solo pieces and group numbers. The solo segments allow each dancer to showcase their individual skills, whether it be acrobatic talents (most notably shown by Adam Bouruqe) or comic flare (Sharyu Mahale), while the group numbers give the show the spectacle typically associated with reality dance TV.

Throughout the competition, one particular competitor’s spark (Chanda, played by Ruby Verma) draws the eye of not only the audience, but of Chunni Babu and Devdas. This causes her to find herself in compromising and difficult situations as the piece progresses; beautifully danced scenes of desire and unwanted love uncover the lesser talked about costs that fame can have and the "importance" of knowing the right people.

As the competition progresses, ensemble members begin to be eliminated, and relationships develop among the remaining competitors. Paro and Devas find their relationship growing rockier under the strain, demonstrated by their facial expressions and stylistic movement changes. The skills of Badghi and Madiraju both as actors and dancers make their relationship wonderfully painful to watch. Meanwhile Chanda, typically the carefree "it" girl of the competition, does a great job of portraying the fear that comes with unwanted advances.

Eventually, Paro and Chanda find themselves going head to head, in direct competition. Both girls have gone on a journey by the end of the competition and have lost lovers, their naiveté, and frankly the softer parts of their characters that had been present at the beginning. They fight both for their men and their title. The sense of bitter competition makes the last few “competition solos” extremely powerful.

Overall, Devdas does an excellent job of blending classic tradition with a familiar reality show format, which not only gives the female characters a (much needed) larger role in the story, but also succeeds in keeping modern audiences invested, regardless of their background or knowledge of Indian dance.

(Devdas played at Theater for the New City, 155 First Avenue, through November 20, 2016. The running time was one hour and ten minutes with no intermission. Performances were Tuesdays through Fridays at 7; Saturdays and Sundays at 2 and 7. Tickets were $50. For more information visit hypokritnyc.org.)

Devdas is directed by Arpita Mukherjee. Assistant Director is Holly Payne Strange. Choreography is by Swarali Karulkar. Lighting design is by Christina Tang. Technical Director is Kyle Rosenberg. Music is by Aalap Desai.