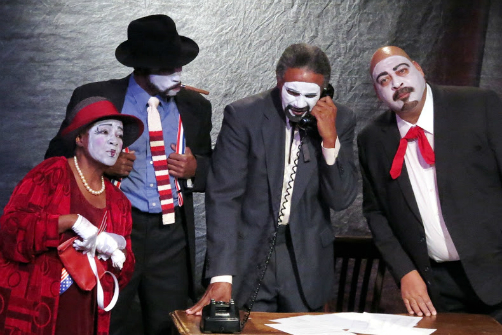 BOTTOM LINE: The Negro Ensemble Company celebrates their illustrious fifty-year history with Douglas Turner Ward’s Day of Absence, a revival of one of the most important satires of the twentieth century.

Two white farmers swat at flies. Their day seems normal enough as they share passing greetings with townsfolk and pleasantries with each other. Slowly, however, they realize a gaping irregularity in the fabric of the Southern hamlet: all the black people have disappeared without a trace. Day of Absence, a cutting satire integral to the Off Broadway Black Theatre movement of the 1960s, portrays the chaos that ensues when the remaining white folks no longer have black people to boss around. Bereft of their floor-sweepers, porters, cooks, shoe-shiners, maids, and baby nurses, the town has a fearsome day as its very economy and social structure breakdown. Day of Absence imagines a day of reckoning, told with humor and cutting wit.

One of the most influential contributions to the modern canon and an important marker in the history of black theater in the United States, Douglas Turner Ward’s Day of Absence received the Drama Desk Award for Playwriting in 1966 and marked the creation of the Negro Ensemble Company. A training ground for African American actors and playwrights, the NEC created and supported black theater when many other forums would not do so. Ward, the first Artistic Director of the NEC, created a sensation with the 1966 production, staged then as now at Theatre 80 St. Marks, sharply criticizing bigoted social structures by highlighting the absurdity of how race has been constructed in the United States.

Without its black citizens, the town and its white inhabitants completely lose the ability to function. Since black people fill all menial positions, their absence leads a disaster. Running through a gamut of emotions, the white mob eventually pleads via a news broadcast for the return of "our Negros," offering the tools of their oppressive labor (shoe shine brushes, waste paper baskets) as incentives for the black folks to come back. They cannot imagine a world in which black folks would ever want any other life, masking a deeper fear that they will not be able to survive without their racist forms of oppression and systemic violence. This is the central insight that makes Day of Absence such a lasting work: the economy of the town—and by extension the whole country—is based on black labor and white ignorance. In the face of a black absence, these white people not only experience economic disruption, but also have no real identity—they are only defined against the blackness of their help.

Making that point even clearer is the show’s use of whiteface, a direct reference to the racist legacy of minstrel shows where white (and black) performers wore blackface. The historical significance of this choice is transmitted from the first striking moments, where we see two black actors perform with clownish white faces. The effect makes it particularly impactful when at long last we finally see a black actor’s face appear without the garish makeup.

Unfortunately, though full of interesting facets based on the central idea of white people mourning the loss of their black servants, including an interview with a Klansman (William Jay Marshall) who demands the black folks come back so the Klan can be the ones to tell them when to leave, the revival's staging struggles to honor the intelligence of the script. Erratic pacing of the series of vignettes works to heighten the feeling of chaos, but unfortunately seems to be more a result of the cast’s somewhat uneven performances than a directorial choice. Current NEC Artistic Director Charles Weldon’s portrayal of the smarmy town’s mayor is played with a rich cat-that-ate-the-canary smile, but the character's long speeches trail off into what feels like ramblings due to a lack of urgency; though this paints the Mayor as a good politician, it somewhat derails the force of the show.

Happily, the show’s cast is large (and includes some members of the original production), and thus provides a welcome mix of energies. In opposition to the Mayor’s languid pacing, the young white couple John (Daniel Carlton) and Mary (China L. Colston), who can’t quiet their baby or eat an edible meal without their housekeeper, perform with vivacity and intensity. Colston’s portrayal as a totally helpless Southern Belle is perfectly full of so-called "Dixie femininity." Likewise, the three telephone operators dealing with overloaded lines (Lauren Marissa Smith, Surayah White, and Cherith Scott) are expressive in their exasperation. It is disappointing, then, that the show’s lengthy monologues are so unequally shared among the cast.

Scenic and costume design, by Patrice Davidson and Katherine Roberson respectively, wryly utilize a patriotic palate, casting the stage and the large cast in variations of red, white, and blue. The effect is a subtle but powerful extension of the aim of the show’s target, indicating a larger national culpability beyond the history of racism of the American South. This is important and right, especially in the current political moment. Day of Absence is of a particular period of twentieth-century U.S. history, and certainly has some age spots. However, fifty years after its first production painfully little seems to have changed. This sobering reality highlights the simultaneous ubiquity and absence of black people from the national imaginary. See Day of Absence in order to preserve the important history of black theatre. Learn about the Negro Ensemble Company and the essential space they have made to celebrate black talent. Demand that, fifty years from now, the show will no longer be so relevant.