The City That Cried Wolf

By Brooks Reeves; Directed by Leta Tremblay
Produced by State of Play Productions 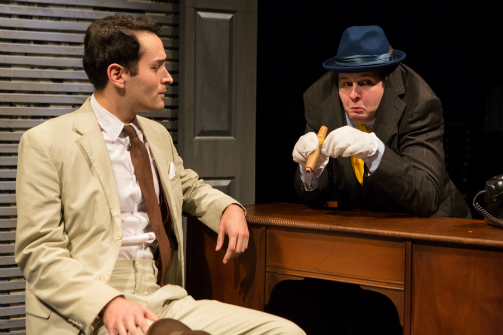 Adam LaFaci and Dalles Wilie in The City That Cried Wolf. Photo by Hunter Canning.

BOTTOM LINE:  An evening of music, puns, and murder that doesn't quite hit the mark.

Trouble is afoot in Rhyme Town, a city afflicted by widespread government corruption and a perpetual penchant for punning in State Of Play’s The City That Cried Wolf. Jack B. Nimble, Private Eye (Adam La Faci), is hired by councilman Humpty Dumpty to investigate his wife’s alleged infidelity. Soon after, Dumpty dies under mysterious circumstances and Jack is left to pick up the pieces and find out who scrambled the egg.

It has all the makings of a classic noir thriller, packed with action and intrigue, and it probably would be one, if every character wasn’t casually dropping nursery-rhyme-themed puns every couple minutes in between bouts of witty banter and monologuing to the audience. The jokes can be a bit heavy-handed, and the sheer quantity allows a lot of room for hit-or-miss results. I laughed out loud a few times, but really only a few, and the rest of the audience seemed to react similarly in scattered moments. While I appreciated many of the references, they overshadowed the other parts of the play. I found myself always looking ahead, waiting for the next joke, trying to figure out the set-up before it came, because the jokes became the main event.

Under Leta Tremblay's direction, the lead actors go with a recognizable stylistic approach to their characters —mysterious and stoic. This choice is obviously influenced by old noir films, but it’s much harder to maintain that kind of quiet intensity onstage. That said, the supporting ensemble is strong; each of the four supporting actors plays a variety of unique and interesting roles. They all bring an exciting energy that helps drive the play forward in an entertaining way. A hilarious encounter with police medical examiners Hansel and Gretel (Dalles Wilie and Gwenevere Sisco) is particularly memorable.

I also enjoyed the design elements. Sets (by Greg Stevens) are economical and easy on the eyes. Sound (Jeanne Travis) is a constant and impactful aide in the overall storytelling. All the costumes (Angela Borst) are gorgeous and appropriate both to the world and the era of the play—clear both in identifying characters and in telling us something about them. However, the use of projection and video design (by Kevan Loney) is by far the most interesting part of the whole creative concept. The careful use of design for narration and ambient effects makes a big difference in how it feels to watch action unfold onstage.

The City That Cried Wolf fell a little flat for me. I had trouble investing in the protagonists and I never really felt a good balance between the humor and the plot. If you’re the kind of person who really likes a good pun, or dad jokes, you’ll have a wonderful time. If not, you might be more satisfied spending your money on a different ticket.