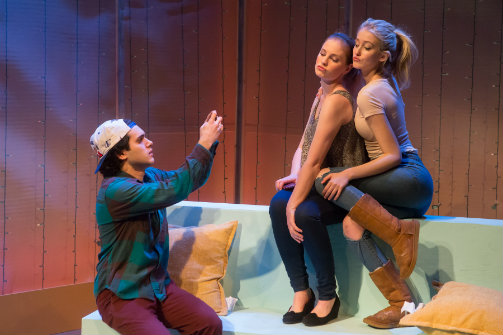 BOTTOM LINE: Connected is a clever and often humorous look at our overly connected—and yet disconnected—technology-filled lives.

The fact that our technology-filled lives have made us both closer and further away from one another, as we look at our computer and cell phone screens as opposed to one another's faces, is not a new fact to be explored by a theatrical production. Lia Romeo's Connected, however, is an enthralling and accurate look at high schoolers (as well as a high school teacher and a recent graduate) and how their lives are affected by their dependency on technology. Their youth means they have never known life away from the connectedness of their devices and the internet, showing that this aspect of their lives has been hardwired into them since childhood. The play is divided into four parts (there is actually also a fifth segment which is available via the production company's website). Each part tells the story of different high school classmates and how their lives have been affected by this connectedness.

In the first segment Meghan (Midori Francis), a high school junior, is inspired to do a striptease to ask out her crush to prom after viewing numerous YouTube videos showcasing boys doing this and reading a magazine article on how much men love stripteases. Meghan rather maladroitly with childish cluelessness (she takes off her tennis shoes as part of the act) strips down for her crush while, unbeknownst to her, some cruel classmates tape it and post it on YouTube. Meghan becomes an underdog celebrity overnight and soon is working the talk show circuit.

In another segment Jill (Gus Birney) heads to a party at the wrong time, after tracking its progression via social media, and ends up connecting with Sam (Aria Shahghasemi) emotionally but decides they can never be friends due to the social structure of her high school. Her dialogue with Sam conveys how much of her life is documented and faked via Instagram and Snapchat to make people believe she is well-liked and always at the best parties, creating the facade that enables her status as popular to live on.

In the final segment Jarred (Aria Shahghasemi) and his friends prank his math teacher Ms. Haverill (Dana Jacks) on the dating app Tinder, pretending to be a potential suitor, and tricking her into starting a dialogue and sending nude photos. In the end, however, Ms. Haverill and Jarred bond over their shared experience of how much more lonely their dependency on technology has made them.

There is not a lot in terms of subject matter that is new within this production, but the characters are complex and well-developed enough so that even a story line that might feel a bit tired is imbued with freshness. The strength of the actors' performances also serves to make this show an engaging one. The adolescent characters are realistic versions and not idealized versions as these characters drink, have sex, and express jaded, adult like world views. Gus Birney as a clueless popular girl and Thomas Muccioli as a sarcastic gay student, wise beyond his years, are especially amusing in their roles. The set is also cleverly designed with rolling pieces that transform into couches, desks, televisions, etc. A large screen overhead shows video to give a sense of place in addition to the somewhat minimalist set (and also plays into the theme of our media-fixated, always wired-in culture). Connected held my interest from start to finish, and I found myself riveted as I waited to see what would happen to the sympathetically rendered characters.

Connected is by Lia Romeo. Directed by Michole Biancosino. Set Design is by Matthew J. Fick. Lighting Design is by Ben Hagen. Orignal Music and Sound Design are by Amit Prakash.  Stage Manager is Allison Raines.