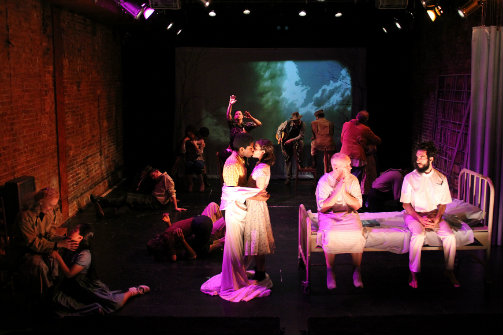 The cast of Clover.

BOTTOM LINE: The new experimental drama by Erik Ehn explores the endless cycle of violence in America through the murder of 14-year-old Emmett Till.

Clover is an emotional, dreamlike theatrical performance rooted in the unthinkable 1955 murder of Emmett Till, an African-American boy living in Mississippi. Intertwined with a few other non-distinct stories about violence, the work serves as an exploration of the cyclical recurrence of violence in America and the ghosts that continue to haunt us.

There are several working parts to the show, including shadow puppetry, folk music, and videography. It’s closer to being a staged mood poem than a play. Most of the time the language is so poetic and disjointed that the story is often incomprehensible, especially considering the busyness of the visual elements. As an audience member there is little to hold onto since both the text and action are conceptual, although Ehn does have a lovely lyricism to his work. It is challenging to understand the relationships between the characters and to even decipher where one story ends and the other begins. Perhaps this could be the point, but it’s unclear if that's the case. The confusion is also a result of the cast—quite large for such a small playing—all being onstage at once, even when their characters aren’t integral to that particular section of the show. While there are three or four storylines related by the theme of violence, the only one that feels tangible is Emmett Till’s. Since I was already familiar with him and the lasting impact of his case, I could rely on my own knowledge to help decode the puzzle.

Amidst the obscurity, there are those special moments when design, direction, and text come together to create clear, moving moments. The spirits of Till and a young pregnant woman who had been killed by her lover dance and play in a river and share a kiss. Till’s parents share an urgent dialogue in the afterlife about how “the story keeps going, keeps happening, happening worse”—highlighting how we continue to face hate crimes and violence in contemporary America. A man who had killed a young boy is plagued with cancer (metaphorically or not, I’m not sure). The imagery in Clover is powerful and certainly made me feel sorrowful and heartbroken, but the impactful elements of the production are overshadowed by the frustration of trying to follow along.