Written and Performed by Chris Gethard; Directed by Kimberly Senior 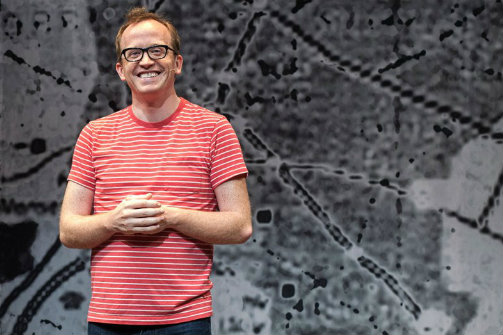 BOTTOM LINE: Storyteller, actor, and host of a beloved public access show shares poignant and funny stories from his life in his polished stage debut.

Were I writing a solo show, I'm not sure I’d want my therapist to invite me to her home in Mexico to work with her on it, but for Chris Gethard, his nine-year relationship with boundaries-averse Barb is just one of the hilarious, provocative, and moving subjects of Chris Gethard: Career Suicide, a show in which he also tackles his long-time struggles with depression and anxiety. Gethard, known to fans for his long-running eponymous public access turned cable show, and for his role as Todd on Broad City, skillfully shapes the laugh-out-loud and cringe-inducing moments that have gotten him to this point.

Originally from New Jersey, a state whose long-mocked rep fuels his anger distress, Gethard starts experiencing anxiety while still in grade school. He equates this period to having an internal monologue, like in Taxi Driver. By the time he gets to college he’s a Smiths-loving alcoholic and battling mightily with mental health issues, to the point where he crashes his car in a suicide attempt. It’s an unflinching scene that Gethard masterfully tells with both pathos and humor as he gives dead-on impersonations of the Jersey women with their thick “Carmela Soprano” accents who come out of their homes to assess the damage.

Like a lot of people dealing with depression, he doesn’t treat the crash as a cry for help, instead keeping that part of himself hidden while staying busy. It’s a while before he seeks out a therapist or tries medication because he worries what drugs will do to his creativity. After finding Barb he discovers, much to his relief, that “I’m significantly funnier when medicated.” And then, as he jokes, he’s cured, happy ending and the show’s over! Of course, as Gethard is careful to clarify, being in therapy and taking pharmaceuticals doesn’t mean he never veers off course again, because he does.

Gethard comes across as incredibly genuine and sincere, in his desire both to tell his story and to provide comfort to others who have gone through what he has and continue to fight the good fight every day. Although not everyone will relate to references to medications and their side effects (like seriously bad hemorrhoids), Gethard does a service by opening up so that others affected by mental illness may benefit from his experiences. He shows the pitfalls of remaining silent about one's struggles, and also how much better it can be through humor and hope.

(Chris Gethard: Career Suicide plays at The Lynn Redgrave Theater, 45 Bleecker Street, through January 8, 2017. The running time is 75 minutes, no intermission. Performances are Wednesdays through Fridays at 7:30, Saturdays at 4:30 and 7:30, and Sundays at 4:30. There are additional performances on some Tuesdays at 7:30; check schedule for changes. Tickets are $48 - $68; student rush is $25. To purchase tickets visit careersuicideshow.com or call Ovation Tix at 866-811-4111.)