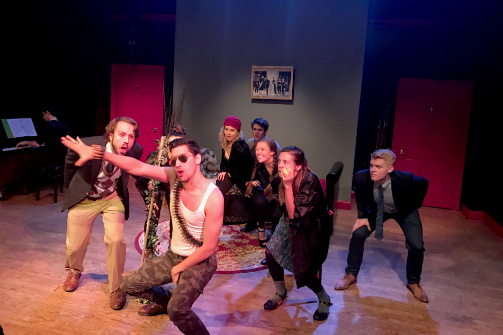 BOTTOM LINE:  A new musical comedy that is shameful and disturbing in the best way, with an ensemble that shines together.

Blatantly Blaine is a new musical about the Blaines, an infamous reality TV show family reunited for a very special episode by their desperate producer Trevor (Chris Renalds), who attempts to utilize fear and stress to make them reveal the secret scandal that forced them off the air years earlier. To ensure his success at this year’s rapidly approaching Emmy awards, Trevor traps the family in their historic home and convinces them that ISIS has begun a full-frontal assault on Beverly Hills. With no choice but to live in the house together, the Blaines try to outlast the ongoing invasion and reconnect as a family. Unfortunately, Trevor has other plans for them.

Blatantly Blaine is hilarious. Not only does it lampoon well-known reality TV tropes, but there are many well-timed physical comedy and visual gags. It’s a very rhythmic show, even when there’s no music. Under Joel Kirk's direction, the pace rarely drops as the Blaine family falls further and further into fits of drama and depravity, like the song where basically everybody has sex. All of their old demons come out and everything gets more and more ridiculous, right up until the end.

The whole cast gives stand-out performances, whether they’re battling an epic drug relapse, overwhelming sexual tension, or just each other. Everyone commits to their role and invigorates larger-than-life characters that nonetheless have very real counterparts in today's tabloids. Amazingly, this is really what keeps the show interesting: those stories we’ve heard a hundred times before (except the ISIS invasion). We recognize these people and have certain expectations about who they will be, expectations that Blatantly Blaine does a great job of using and subverting.

The music is upbeat and the lyrics are clever. Writers Amanda D’Archangelis and Anderson Cook really let the world they pull from influence the way the story is told through the music. There's a great pop sound that fits perfectly with the story, and a catchy theme that gets sung repeatedly, but D’Archangelis and Cook also play around with a few different musical styles. Every song is somehow surprising, be it because of a distinctive melody or a spontaneous dance break, so each one is unique and entertaining.

Because it pokes fun at the culture and fandom of reality TV in a satisfying way, Blatantly Blaine is a musical that will appeal both to those who really love reality TV, and to those who really hate it. In fact, anyone who can appreciate a good dirty joke will probably have a great time.

(Blatantly Blaine plays at The People’s Improv Theater, 123 East 24th Street, through November 12, 2016. Running time is 90 minutes, no intermission. Performance schedules varies: most shows are in the evening (starting between 7 and 11), but there is one matinee. See complete list of performances at thepit-nyc.com. Tickets are $18 online or by phone. For more information, or to buy tickets, visit thepit-nyc.com or call 212-563-7488.)