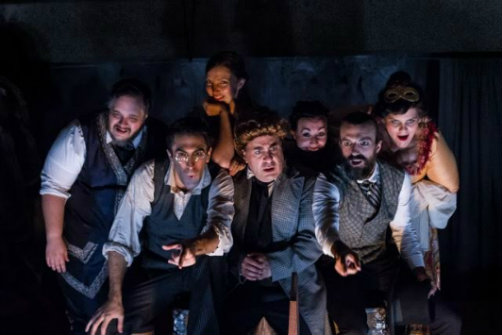 BOTTOM LINE: A 100%-committed cast of physical performers stud the stage in this thoughtful reflection on the American Musical.

The historical The Black Crook, unlike this modern take, is a difficult piece to love. The original 1866 production’s title of “first American musical” is hotly-debated; it was certainly the first box-office-hit, a cast-of-millions affair that started the sprint for a profitable Broadway in America, but it offered little in the way of form or style innovations for later American musicals. The “book” was universally dismissed then and now as terrible, the songs were unmemorable, and it was generally acknowledged that it was the thrill of seeing ladies’ legs in skin-tight pink leggings that really sold audiences.

Joshua William Gelb’s excellent modern production celebrating the original’s sesquicentennial anniversary (that's 150 years, for the rest of us) acknowledges and addresses the weaknesses of the original piece; it exists as half “story of” and half modern interpretation. The emotional center is Charles Barras (Steven Rattazzi), the earnest playwright who has hopefully offered his script to many producers, in the hope of a commission that might allow him to afford expensive treatment for his sick wife. When the play is finally bought by one of the more lowbrow playhouses at a generous rate, it pains Barras deeply to see his work serve as the “curtain rod” for a touring French ballet troupe’s pre-packaged dance numbers. He succeeds beyond his wildest dreams with The Black Crook’s commercial success, but dies a failure in his own mind, still seeking artistic fulfillment.

In Gelb’s hands, Barras’s struggle for artistic integrity against the birth of the musical is deliciously critical. With the audience’s full historical knowledge that Barras’s play is not the high dramatic work of art he believes it is, his constant stammering outrage about what the producers are “doing to his play” is pitiable. Steven Rattazzi is double-cast as both Barras and Rodolphe, the young, handsome mangenue of The Black Crook. Rodolphe struggles to escape a deal with the “devil” and his faithful servant, who are double-cast as the producers and played by Merlin Whitehawk and Lizzie Hagstedt (masters of the evil laugh). Rodolphe’s story is parallel to Barras’s, and Barras’s struggle is an allegory for theatre’s struggle to overcome the mindless high-profit musical legacy of The Black Crook.

This show is meant to exorcise escapist musicals. It’s not subtle which musicals are implicated: Matt Stine’s sound design directly quotes Wicked and The Lion King at one pivotal hellish moment. It endears the audience to its downtown-theatre style with opera bouffe/commedia physicality that ventures into naturalism and rage-filled Ridiculous theatre just enough to keep things funny and dangerous. Yet when the example of high dramatic art on display is Barras’s terrible play, and Gelb’s audience is having such a great time during the gratuitous original music sections (grittily crooned Regina Spektor-like by Alaina Ferris), not to mention the mindless dance numbers cheerfully choreographed by Kate Rose McLaughlin, such biting criticism doesn’t land heavily on the audience. The show even excuses the audience at one moment for loving the mindlessness, as a post-disaster group “in grief, desperate for distraction.” Luckily, this Black Crook’s clever combination of smarts and escapism treads these murky blame-filled waters just fine, as a fun night out for theatre fans of all stripes.

(The Black Crook plays at Abrons Arts Center, 466 Grand Street, through October 7, 2016. The running time is 2 hours 15 minutes with one intermission. Performances are Wednesdays through Saturdays at 7. There is also an additional performance on Tuesday, October 4 at 7. Tickets are $25 and are available at abronsartscenter.org.)