Ballet Hispánico at the Apollo 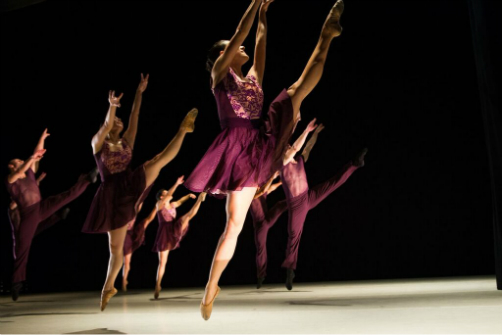 BOTTOM LINE: Ballet Hispánico at the Apollo is a dynamic and spellbinding evening of dance performed by an amazingly talented company.

Entering into the Apollo theater, I had no doubt that I would enjoy Ballet Hispánico’s Reshape / Reverse / Replay program, mostly because professional dance is simply insane. What dancers and choreographers are able to accomplish at this level defies possibility. However, offering a review that essentially states "It’s New York City dance! Go see it!" would hardly be any help to anyone. So, at least take it as a baseline that, regardless of any creative choices, every measure of talent involved in this show, from the choreography to the lighting design, was simply world class.

The frenetic Flabbergast is defined by its joyfulness and offers genuine moments of humor throughout, a difficult task for most works in dance. The timing of jokes translates to physical movement, not in any one moment of particular quickness or slowness but in the interactions between: the turn, the misdirect, the all-too-immediate stop. This would hardly be feasible if the company members were not so attuned to one another and the audience, as well as capable of executing the movement with precise emotion. The piece also offers a perfectly synchronized, high energy group segment that allows the audience relinquish any fears of misunderstanding the piece’s exact meaning and simply absorb the joyous energy of it all.

Despite having no authority on which to state this, the second piece, Linea Recta, is perfect. I do not have a great working knowledge of dance. But Linea Recta is one of the most beautiful things I’ve seen on a stage. Annabelle Lopez Ochoa’s choreography is performed to an original guitar composition (played live) by Eric Vaarzon Morel. It explores the absence of physical contact between dancers in flamenco; it does this not by having the ballet performers keep their distance from each other, but to use their distances, their closeness, their inevitable touching, and their lifting to full effect. The costumes work to the same end; in one instance a lengthy flowing train twists its way lasciviously between its wearer’s legs and those of her company members. I loved this piece, as did those around me, evidenced by its standing ovation (and it wasn’t even the final piece of the night).

Danzón is a sweeping and spirited number choreographed over several famous Latin standards. When one thinks of a Latin ballet, something like this may immediately come to mind: a syncopated, jazzy yet elegant piece including duets, solos, and larger group sections. The only serious weakness of Danzón was the strength of the two preceding pieces. Whereas Flabbergast and Linea Recta both offered something impressively idiosyncratic, Danzón appeared to be about as standard of a piece as the music accompanying it. Linea Recta is simply a very hard act to follow.

Perhaps some critics would judge that by performing a more modern style of ballet, inspired by Latin forms such as the bayón, Ballet Hispánico lacks some essential element to be considered an elite company. Aside from that, dance simply doesn’t speak to some people and obviously Ballet Hispánico will likely not be up their alley. However, if you have a somewhat open mind about dance and generally enjoy it, I recommend seeing one of Ballet Hispánico's future shows. They have put together a massively talented company that can deliver a brilliant evening of work.

(Ballet Hispánico at the Apollo played at the Apollo Theater, 253 West 125th Street, through November 19, 2016. The running time was one hour and thirty five minutes with two intermissions. Performances were Saturday 11/18 and Sunday 11/19 at 8. For more information visit ballethispanico.org.)