Tickets are no longer available as this show has end its run.

Another Son of Venezuela 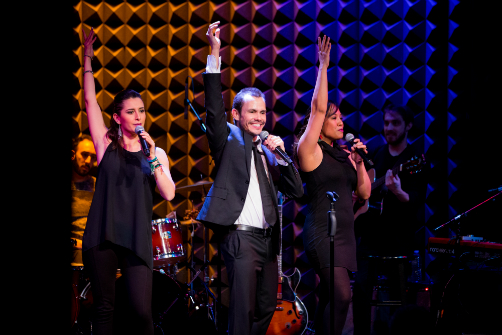 Joanne Javien, Migguel Anggelo, and Michelle Walter in Another Son of Venezuela. Photo by David Andrako.

BOTTOM LINE: An autobiography as versatile and passionate as its singer.

Before his final number this past Thursday night, Migguel Anggelo led the crowd at Joe’s Pub in an ovation for the late, great Prince, who had unexpectedly passed away earlier that day. The evening wrapped up with “Cucurrucucu Paloma,” a huapango onomatopoetically named after the call of a dove. Like Prince in his “When Doves Cry,” Anggelo sung of love, of loss, of heartbreak, and whether from the loss of a musical great, the relatability of the themes, or the power of the singer up on the stage, you were drawn to and struck by every word.

It was a fitting ending to the already emotional and poetic Another Son of Venezuela, Anggelo’s autobiographical show that wrapped last week after two performances at Joe’s Pub. Directed and conceived by David Drake, writer and star of the Obie Award-winning The Night Larry Kramer Kissed Me, and with musical direction by Mau Quiros, Another Son of Venezuela explores Anggelo’s life through a series of songs and stories as varied as you would expect and as poignant as you would want.

Anggelo’s tale is one in 40 million— that is, one of the 40 million-plus immigrants living in the United States. After coming to the country from Venezuela through Miami 23 years ago and obtaining a green card after 13 years of working and waiting, it’s clear that in addition to his strong pride for his home country, he has carved out a place for himself here, even if it’s just the little corners that are the cabaret clubs of New York.

But from his very first number, it is evident Anggelo possesses a talent oft taken for granted: the ability to connect with an audience, no matter the size. It is a great credit to him that whether or not you understand what he is singing about, you listen without interruption, fixated and entranced by his infectious energy. As he mambos on stage (the whole stage, I should add, frequently covering every inch of the space available to him throughout the show) with background singers Joanne Javien and Michelle Walter to “Pop and Mambo,” the energetic opener penned by Anggelo, Quiros and Drake, it’s impossible not to grow immediately attached.

In addition to his own numbers, such as “Black Gold,” the story of why he left Venezuela, and the titular “Another Son of Venezuela,” Anggelo interprets the classics with no fear of making them his own. Be it “Feeling Good” arranged with his own “Todo,” or “When You Wish Upon A Star” in Spanish, he sings the familiar with a twist. As diverse as the set list is, he handles it with tremendous dexterity, jumping nonchalantly from number to number. Never before have I seen somebody jump from “Malambo No. 1” to The Sound of Music’s “The Lonely Goatherd,” sung in an impressive falsetto and both in breakaway costumes, but I’m not sure if I ever want to see anything else in a cabaret act.

Another Son of Venezuela is an autobiography and a work told very much through the lens of his life, but Anggelo is an almost shockingly unselfish performer. He introduces it as “our show”— referring to himself and his band, The Immigrants—frequently gives his backup singers center stage, and often turns around to banter with his bandmates, discussing their own lives and origins. But he doesn’t keep it just to those on stage. On more than one occasion, he sang to directly to audience members, quizzed the room on its Miss Universe knowledge and spoken German with a man at the front.

For even its campy moments, it is Anggelo’s story, the story of somebody who may always be “a person of two worlds.” He speaks about feeling safe and lucky in New York, about singing on the streets of Cologne, about being robbed on a beach in Venezuela. He speaks powerfully about his father (for whom he prays for before every performance) and about his own sexuality, overcome with emotion. Then he sings about all of it, too, reinventing songs you may or may not know and making you feel something new. He builds each and every note and syllable and feeling as if it were made from his own blood, as if he is inviting you to take a small piece of his soul with each performance. How could you possibly refuse?

Anggelo speaks and sings of hopes of a better world and about finding peace—and in no better of a time than the present. That kind of optimism, as political as it’s been made to be, is tossed around fairly frequently nowadays; the difference with Anggelo, however, is that with Another Son of Venezuela, he makes you believe it’s possible.

(Another Son of Venezuela was presented at Joe’s Pub, 425 Lafayette Street, on April 11 and April 21, 2016. More information can be found online at migguelanggelo.com.)

Another Son of Venezuela is conceived by Migguel Anggelo and David Drake. It is directed by David Drake. Musical Direction is by Mau Quiros.