By Hansol Jung; Directed by Ralph B. Peña
Produced by Ma-Yi Theatre Company 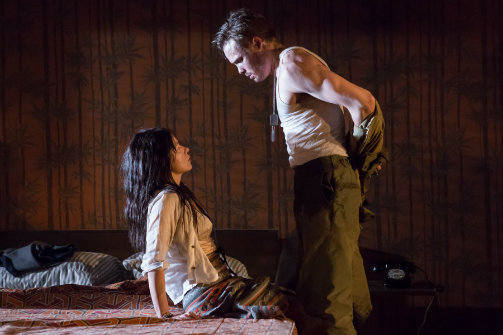 Julienne Hanzelka Kim and Mickey Theis in Among the Dead. Photo by Hunter Canning.

BOTTOM LINE: A combo of outstanding design and a smart script that explores the horrors of war from the perspective of three time periods.

What a privilege it is to experience truly special writing like Hansol Jung’s Among the Dead. This play, presented at HERE and produced by the super cool Ma-Yi company, totally blew me away. A multi-layered story of great depth, Among the Dead is a feat of technical elements and story structure. Hanson Jung weaves together a bizarre and heartbreaking reality of unnecessary war, twisted love, forgotten family…and Jesus and SPAM.

1944: A Korean comfort woman, Number Four (Diana Oh) , hands a baby to Luke, a white soldier (Mickey Theis) and plans to meet him a year later. 1955: Number Four wants to jump off a bridge in Seoul. 1975: Korean-American Ana (Julienne Hanzelka Kim) has arrived at a hotel room in Seoul with an urn. Jesus, the bellhop (the always charming Will Dagger), hands her a journal and a joint…and everything turns upside down. Reading the journal, we learn Ana is on a mission from her estranged father, who in his writing reveals his great sorrow about a war he never wanted to participate in, and the woman he met there.

Perspective is an interesting puzzle explored in this play. Ana learns about her past as she lives out the journal entries and inhabits her lost mother, eventually becoming Number Four entirely. And we get to know Number Four long after she gives birth to Ana, separately from Luke's diary ramblings. Confused? Don’t worry, it's quite clear when you see it. The through line connecting these stories is Jesus, who provides gentle guidance to Ana as a bellhop, to Luke as a fellow soldier, and to Number Four as himself—an everyman who holds a mirror up to the suffering he witnesses in the other characters, whether they want him to or not.

Among the Dead handles tough subject matter with the reverence such topics deserve but do not often receive. What is so difficult is facing the reality that even our most trusted heroes can fall prey to the most basic instincts. For example, Luke is a tough character to watch: a white writer sent to war unwillingly who, when he watches Number Four’s sister get assaulted by Japanese soldiers, in turn assaults Number Four. The truth of Luke’s truest pain is written masterfully, yet simultaneously feeds into the familiar trope of the tortured white soul: Ana recalls having never known Luke, a Jack Kerouac-y dude who shirked his responsibility because he couldn’t bear to spend much time with her.

Throughout the show, it sometimes feels as if, in his effort to remain as truthful as possible, Mickey Theis plays Luke with almost too much sympathy. However, this leaves room for the women to connect near the end of the play. As Number Four, Diana Oh is cool as hell (I’ve been an admirer since My Lingerie Play). And Julienne Hanzelka Kim is masterfully vulnerable as Ana, with a patient curiosity that allows the world to reveal itself to her. I was a little disappointed that we know almost nothing of Ana until we learn about her father, but Kim breathes life into Ana where the story does not.

I love playwright Jung's talent for the mystical. She is a smart writer, and not only for the obvious reasons (Yale educated, Humana commissioned, translator for Oregon Shakespeare Festival’s Play On!). Jung is a writer who is intuitive about structure, original in vision (and visuals), and powerful in her tapping into the untold story of history. My favorite stylistic feature of this work is Jung's ability to let her characters float in and out of present consciousness, without actually calling attention to the choppiness that can occur when exploring multi-layered dimensions. In fact, Jung completely avoids overlapping choppiness all together—her multi-dimensional world flows seamlessly, thanks to the way her smart writing works in tandem with all of the technical theatrical elements (special shout out to set designer Reid Thompson—that wallpaper scrim hiding the 1955 part of the story is incredible!)

Among the Dead is magical. And while some of the characters are a little under-developed and therefore hard to get behind, the magic is in the world that Jung, director Ralph B. Peña, and the design team (Thompson, Becky Bodurtha, Oliver Wason, and Kenneth Goodwin) have created to facilitate the discovery of a multi-layered truth. Hansol Jung is a writer worth paying attention to; she writes tragedy with earnestness and lets her stories unfold with unique intricacy. I highly suggest the beautiful dark comedy Among the Dead.

The cast is Will Dagger, Julienne Hanzelka Kim, Diana Oh, and Mickey Theis.