Would You Still Love Me If... 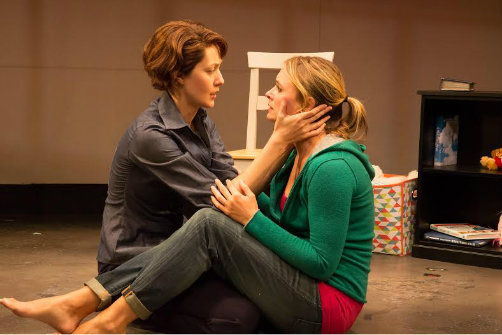 Sofia Jean Gomez and Rebecca Brooksher in Would You Still Love Me If... Photo by Len Prince.

BOTTOM LINE: A delicate and taboo subject is presented through the lens of the privileged and apolitical.

Would You Still Love Me If..., a drama with comedic moments (that more often than not weaken the would-be strong emotive scenes of the play) tells the story of Addison (played by the tender and sensitive Rebecca Brooksher) and Danya (played by the talented and apt Sofia Jean Gomez), two women who have been together for two years and are now trying to adopt a baby. The bigger premise of the play though, and its most promising trait, is asking why we love who we love, and how much said love can overcome.

The conflict comes from the lack of communication between Addison and Danya, but it is somewhat convoluted. While Addison has found a baby, whose mother-to-be is a poor teenager who’s been raped, she keeps the whole subject under wraps from Danya—and from Danya alone since even her boss knows. On the other end is Danya. She not only identifies as transgender, but she decides to go through with her transition while keeping her partner in the dark. While the arguments of 'doing it for myself' and 'in my own time' are nothing but valid, in the context of the play they become selfish, unlikely and naive.

What could be a powerful play with a meaty plot has its strength and contemporaneity washed away by lecture-like dialogues and a politically correct language. As far as the social context of the characters goes, it is a privileged one. Much like the future baby that represents the dream family for Addison, the political themes present in the play are nothing but fodder for an attempt to build dramatic action. At one point, Danya needs $25K to move forward with the operation and her mother Victoria Pruitt (played with stark presence by Kathleen Turner) simply opens her purse and writes her a check for it. Aside from one scene between Addison and her partner’s surgeon-to-be Dr. Gerard (played with intensity by Roya Shanks)—where the transition between genders is explained step by step only timidly touching upon the violence and intense pain faced by transgender people in order for their outside to become a reflection of their true identity—all other scenes seem to carry dialogue that is repetitive or that generates an intimacy with the audience that ends up being either generic or superficial, like Danya’s plight for acceptance.

While the play isn’t without its pleasurable moments, it led me to question why it chose transsexuality as a theme to then only half-explore it. The direction of the play, by Kathleen Turner, adds the little unity and dramatic weight that the script lacks, but can't go far beyond it. The scenic design by Brian Prather and the lighting by Zach Blane build a basic and effective atmosphere, but without much creativity. The costume design follows along the same path of basic and quotidian, apart from when Dane, the fully transitioned trans-man, comes into the story.

All in all, it’s an ambitious play that consistently misses its opportunities for grand theatrical moments, for awakening empathy, for raising awareness, and for questioning of our contemporary gender and identity politics. Even if the play was not about that, some subjects, when tackled, are too heavy to just serve the creator. Sometimes the creator has to serve them. And this would be one of those times.