Welcome to the Kingdom of Saudi Arabia 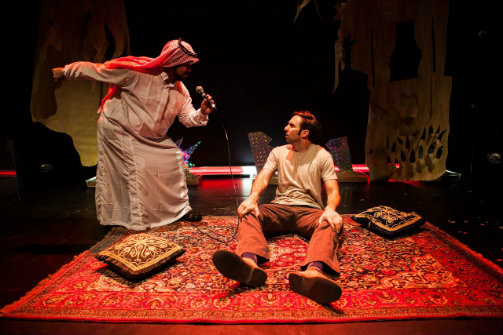 Christopher Michael McLamb and Joey LePage in Welcome to the Kingdom of Saudi Arabia. Photo by Maria Baranova.

Welcome to the Kingdom of Saudi Arabia opens with Hank (Joey LePage) wanting to work abroad, seeking some adventure in life. When he finally has the chance to work in Saudi Arabia, he brings along his conservative protestant wife, Tina (Jessica Dean). The opening prayer song has catchy lyrics and Jessica Dean gives an enjoyable performance. The music, by Peter Stopschinski, includes 1970-80s synthesizer pop songs tinged with cliché Middle Eastern scales. Direction is by Luke Landric Leonard, lyrics by Leonard and Katie Pearl.

Do not be mistaken by the title, this is not a composition where you will get to know more about Saudi Arabia. In fact, it is the opposite: a caricature of the increasingly disorienting lives of Hank and Tina, and the strange British couple, Dick (John Smiley) and Fanny (Sarah Grace Sanders), who are their next-door neighbors. The two couples live in a gated community in Dharhan. Their stories become increasingly dysfunctional, and are constantly interrupted by irrelevant jokes told by various actors, like an old-time variety show.

Set in the 1980s-90s, the show mentions the changing attitudes of the Arabic people and how they increasingly drifted away from Western ideals. But the drama reveals no deeper research and knowledge of Saudi Arabians or Middle Eastern culture. The two Arabs, Abdullah (Christopher Michael McLamb), and Zillah (Ruthy Froch), are interesting performers but are only cardboard characters. Just as Tina is about to reveal an important observation about the female members of Abdullah’s family, Fanny interrupts her by walking away, seeming uninterested, where she prefers to flirt with Tina’s husband Hank. The musical is a magnified version of this particular moment, where mundane and decadent ex-pat lifestyles take center stage. The vast land of ancient Mesopotamia and its people, along with the plot, gets further lost and misunderstood. If there is a deeper message at play here, it isn't successfully communicated. The lack of material to drive the story forward and poor character development make the whole plot seem sloppy. When interesting information is presented, it has little connection to the rest of the story.

Overall, the cast is strong in their roles as well as multitasking in different roles, such as John Gasper performing as Randy and other odd characters. It was sometimes difficult to understand the words, such as in Hank’s solo songs, but the actors are engaging and give a commendable effort.