By Charles Cissel; Directed by Robin A. Paterson
Produced by Wave Productions 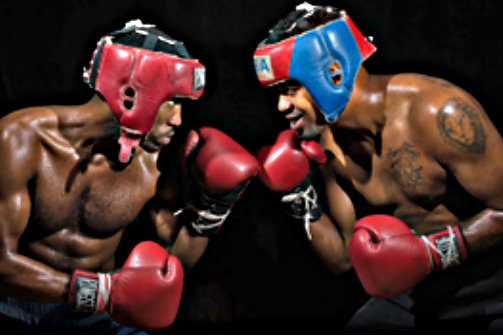 Set in Harlem, this dramedy follows two boxing brothers Ivan (Duane N Cooper) and Mitch (Temesgen Tocruray) as they help the former defend a title. As they train, Mitch and their dad Joe (Jay Ward) meet and greet Ivan’s white friend Sam (Benjamin Katz) with racial hostility. Determined to bring Sam into his world, Ivan invites him to his mother Suzy’s (Zuhairah), house. There Sam meets Gracie (Angelica Gregory) and Jesus or Step (Wilton Guzman), Ivan and Mitch’s sister and stepfather, respectively. Sam, an often unwelcome presence, folds himself into this family with surprising results.

Walking into the theatre you notice Tocruray, Cooper, and Ward prepare in the ring. '80s jams play in the speakers above and you are transported to the Hip Hop era. Wallop references Chris Rock’s hilarious biographical sitcom Everybody Hates Chris in its comedy and Spike Lee’s seminal film Do the Right Thing in its dramatic punch. Like the two sources, the play explores racial mingling, yet elevates the racial climate to an intense degree that these references did not. I was positively engaged in the brothers’ warring positions: both boxers with gilded dreams planted by their stunted father. Yet that storyline was not as deeply expressed as I would have liked. Instead, the play is a series of vignettes of Sam’s life, being harassed, finding black girls attractive, and eventually gaining the group’s approval. Katz portrayal of Sam is comedic, he’s a shy guy who becomes self-assured later on. He’s contrasted by consistent characters like Mitch and Joe, who are brazenly antagonistic. But, where Mitch is principled and able to see loyalty through his selfishness, Joe is not so fortunate and serves as the play’s villain.

The women also pose some questions around roles and expectations. Gregory’s Gracie is a new woman, sexy and free, but restrained by her race. Gregory bounces like a Janet video and adds some light-heartedness to the show. She can just as quickly shut off the fun, however. A somber scene reveals Gracie’s attraction to Sam and her fear she cannot follow through because of historical scars. I appreciated this moment from writer Charles Cissel; it represents an often unspoken part of the trauma of prejudice and race in America? Still, the play glosses over these gems to rest in the familiar: baby-daddy fights and screeching, praying mothers in the street. Though her climactic scene discouraged me, Zuhairah’s Suzy has some great moments in the play, like when she confronts her feckless ex-husband Joe about abandoning her. This scene is coupled with a wordless moment that lets Suzy caress the old boxing ring, remembering her past with great weight. And though Joe’s no good, Ward expertly delivers a drunken monologue that communicates the many sides of each of these characters, showing that this not-quite-perfect play does have layers.

What is perfect is the stellar set design by Michael Minahan. Creating an unboxed neighborhood, Minahan makes sure every bit is seen. A three-paneled stage displays the boxing ring where the boys battle, and the family apartment, including Gracie’s bedroom. However, in a feat that explodes what can be done in a black box, Minahan creates an arrowed alleyway, expanding the space from linear to multidimensional. Paul Chambers’ lighting design is equally thrilling with perfect moods to dictate the time of day and specials to orchestrate action. As Cooper’s weary Ivan fights in the ring, the somber blues and reds gave me background to his struggle. Tim Giles creates an awesome soundtrack with original sound and music. A perfect '80s tracklist plays throughout the show, a mix of popular unhinged beat with edge deepening the play nicely.

Helmed by director Robin A. Paterson, Wallop boasts a strong cast, a stellar set and some informing music; Paterson even does a good job of employing Negro Ensemble Company executive producer Karen Brown as the play’s dramaturg to expand its reach.

Wallop is written by Charles Cissel and directed by Robin A. Paterson. It is produced by Wave Productions. Set design is by Michael Minahan. Lighting design is by Paul Chambers. Sound design is by Tim Giles.