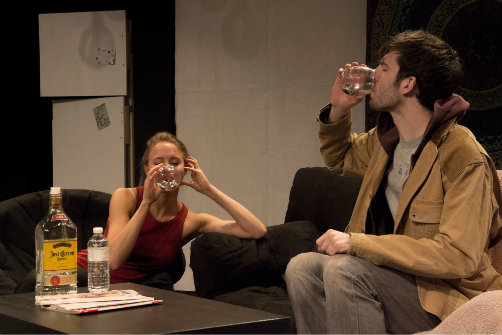 A scene from Unhealthy.

BOTTOM LINE: Relationships and mental health collide in this examination of millenial dysfunction.

The term “unhealthy” gets thrown around a lot these days, often in different contexts. It can mean sick, as with one of the many bugs going around this time of year; ill-advised, as in that 4 AM “Moons Over My Hammy” last Saturday; or polluted, as in the Gowanus Canal. Battalion Theatre’s Unhealthy explores the word’s versatility, presenting possible connotations from the juvenile to the disturbing, and everything in between.

During her curtain speech, director Kelly Teaford brings her four actors onstage and explains that the play’s casting is fluid. Each male and female actor knows both of his or her gender’s parts, and the ensemble rotates roles over the course of the run. At the performance I attended, Teaford had decided on the casting ahead of time, but she revealed that casting for the final four performances would be drawn out of a hat, so that not even the actors would know their roles beforehand. Though not, strictly speaking, “unhealthy,” this mix-and-match casting is far from novel, and, if done poorly, can come off as gimmicky and cheap. In this production, however, we soon realize the implications of the different casts—implications that mirror and enhance the issues at the play’s core.

Unhealthy opens with a melodramatic dressing sequence underscored by a haunting melody that recurs throughout the piece. As each actor dons his or her costume, the four exchange meaningful looks that portend the coming tension between their characters. After this brief prologue, the lights come up on a typical apartment shared by recent college graduates. In walks Celia (on this evening, Kullan Edberg), one of the apartment’s inhabitants, a pretty, white twenty-something with a phone pressed to her ear. Though her conversation is cordial, something seems off—at one point, she must remind the voice on the other end that he has a girlfriend (unhealthy).

When a creepy stranger, Maycomb (Dan Gonon), arrives at the door asking for her roommate Michelle, Celia inexplicably invites him in (unhealthy). The seemingly disturbed Maycomb explains, through stilted speech without volume control, that he’s not so much a friend of Michelle’s as an ardent fan of her acting, one who’s decided thusly to visit her at her home (unhealthy). Regardless, Celia lets him stay (unhealthy). The famous Michelle (Laura Piccoli) comes home shortly thereafter, followed by current costar Kurt (Gerrit Thurston). The two claim they are going to run lines for their upcoming production of Death of a Salesman. After Michelle convinces Maycomb to leave and Celia goes out for the night, Michelle and Kurt are left to their own devices. Flouting the rules of her long-distance relationship, Michelle summarily seduces Kurt (unhealthy) and the real fireworks begin.

When Celia returns, she is both very drunk and very high (unhealthy). She returns to find Kurt in the kitchen, in his underwear, eating one of her protein bars (… healthy?). Celia confronts him about Michelle, revealing that Michelle’s boyfriend is Celia’s good friend (with whom she was on the phone earlier) while eating a piece of pie (unhealthy). She throws up shortly after eating said pie, which we later discover is due more to her bulimia than her substance abuse (unhealthy). Despite Celia’s near-incapacitation, the two engage in a prolonged “will-they-or-won’t-they” before, you guessed it, they do (unhealthy). Only a little bit, though. Kurt insists he’s not a bad guy. He doesn’t seem like one...at least not yet. However, it becomes hard to defend his actions in the second act, actions which are trumped only by Maycomb’s in their unhealthiness. What happens in that second act I dare not spoil, but suffice it to say things escalate rather quickly.

At first glance, Unhealthy sets up as a standard story of today’s young people bickering—reasons to be pretty with smartphones. In the first 40 minutes, the most “unhealthy” we get is a girl in her twenties cheating on her boyfriend.  The second act, however, is something entirely different; playwright Darren Caulley appears to lose interest in his characters’ #firstworldproblems and decides to go for the gold. Whether his gambit is successful is open to interpretation, but it certainly presents the audience with an indelible moment of “unhealthy.”

Aided by Caulley’s snappy, focused script, the four actors deftly confront their characters’ desires and insecurities. Some of the characters’ fights are bloated with unnecessary dialogue, but there’s always another moment of passion or confrontation just around the corner. Teaford’s direction appears minimal, but not much is necessary. The play takes place entirely within the apartment’s four walls, and the interactions are far more verbal than physical.

What I left the production thinking about above all, however, was what I didn’t see: the other possible casts. All four actors are physically and energetically different. I wondered what would’ve happened had the shorter Gonon played the hunky Kurt, or the delicate Piccoli played the crass Celia. The actors are all young, attractive, and white—a more diverse cast would have likely unlocked many more intriguing and challenging possibilities—but the mind wanders nonetheless.

Speaking of the mind, Unhealthy seems to conclude that the mind is the place from which all of the worst disease springs—obsession, infidelity, body issues, whatever disorder(s) Maycomb has—and the play offers no cures. All we as an audience can do is watch as the people before us are consumed by jealousy and pride to the point of danger. Watching the characters make bad decisions over and over can get depressing and, by the play’s climax, there is the temptation to jump up onstage and perform emotional surgery. Even in the midst of an increasingly violent episode, you might have the strong desire to help, to get between two of the characters and help them work things out. I mean, they’re right there how hard can it be? Personally, I wouldn’t recommend it. Seems unhealthy.

(Unhealthy plays at The Kraine Theater, 85 East 4th Street, through October 24, 2015. Performances are Thursdays through Saturdays at 7, with a special Sunday performance October 11th at 7. Tickets are $18 and are available at http://www.horsetrade.info/the-kraine-theater or by calling 212-777-6088.)