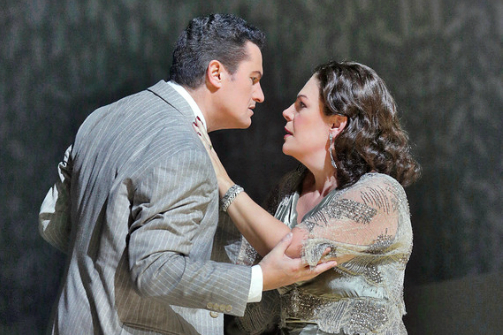 BOTTOM LINE: In one of the Met’s less opulent but still aesthetically intriguing productions, a Swedish king is secretly in love with his friend’s wife during a tough political climate.

It’s 1792 in Stockholm, Sweden, and tensions are high for King Gustavo III (tenor Piotr Beczala). Not only is he hated because he has declared war on Russia and for implementing the Union and Security Act just a few years earlier, but because he toils over his affections for Amelia (soprano Sondra Radvanovsky), wife to his secretary and friend, Count Anckarstrom (baritone Dmitri Hvorostovsky). To further complicate things, Amelia returns his love, even though she is fighting her feelings valiantly. Resistance to political reform and the suspicion of infidelity are the driving forces behind Giuseppe Verdi’s visually appetizing and emotionally moving Un Ballo in Maschera.

Based on real-life events surrounding Gustav III of Sweden’s rule (1771-1792) with a fictitious love-triangle thrown in, Un Ballo in Maschera (Masquerade Ball) grabs your attention right away. Playing with geometric shapes and dimensions and a striking and massive portrait of fallen angels being kicked out of heaven, Paul Steinberg’s optically pleasing set takes your breath away well before you learn of Gustavo’s plight.

Bold and more than a little reckless, the only thing that seems to stop Gustavo in his tracks is Amelia. Unfortunately, Amelia’s got a man, and he’s in the king’s court: the trustworthy (unlike history) Count Anckarstrom, played memorably by Hvorostovsky. Despite herself, Amelia loves Gustavo back. To stave off any amorous feelings, Amelia seeks the counsel of fortune teller and possible witchcraft practitioner Ulrica Arvidsson (mezzo-soprano Dolora Zajick from Salem, ahem, Oregon), who in a previous scene predicts Gustavo’s death by the hands of a friend. When Amelia is sent to retrieve a special herb for a love-thwarting potion, her actions instigate a series of misunderstandings and openings that bring about the ruin of three people’s lives.

Unfurling beautifully in shades of mostly white and grey, Un Ballo in Maschera’s look and feel are more approachable to the newly-initiated opera patron. Though the opera takes place in the late 18th century, Brigitte Reiffenstuel’s costumes look more modern: men wear suits and women wear dresses that look like they’re from the 1940s. The whole getup feels familiar, yet fresh.

A curious but murmur-worthy stylistic choice, however, is the staging of a young page named Oscar. Appearing in the opening sequences as a fallen angel who has now become a man, Oscar is played with verve by soprano Heidi Stober in drag. If you consider that the devil and his henchman are thought of as masters of disguise, this decision is apropos for the character. Yet, the first scene suggestions a deceptive overtone for the opera that just doesn’t play out effectively enough, even if there are masks at the masquerade.

The masquerade itself, even though the opera is named after it, is not a huge part of the story. So much transpires before that fateful party that the ball almost serves as a punctuation instead of the vehicle that carries the opera.

What does carry the opera well are the melodic and haunting voices of the singers. Though everyone puts in a fine performance, Radvanovsky and Beczala duke it out for the most enchanting solos. Each character is graced with piercing moments that convince us of their love for one another. And when Amelia is falsely accused of being untrue, our hearts break right along with hers.

While the audience empathizes and understands the emotions that the characters feel, Maxine Braham’s choreography is quizzical at best. Petulant one moment and sensual the next, there are times when both of these tones seem out of place.

Un Ballo in Maschera is unpredictable and thrilling. Though some of the aspects may not be as easy to digest as the others, it is a mesmerizing experience that is sure to inspire awe and good conversations.