By Agatha Christie; Directed by Victoria Rauch-Lichterman
Produced by Theater Breaking Through Barriers 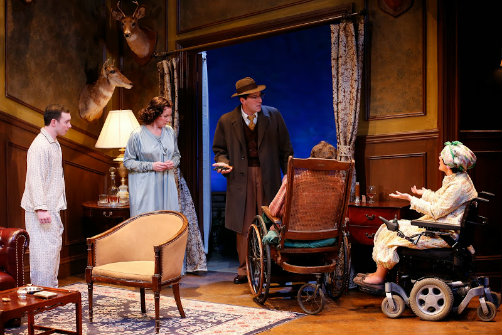 BOTTOM LINE: A solid production of an old chestnut, TBTB’s The Unexpected Guest shows that there are joys to be found in the most unassuming of packages.

I grew up on Agatha Christie’s murder mysteries – both reading her novels and seeing them on stage (it was a yearly tradition for the Blackfriars Theatre company in my hometown). While I haven’t encountered them much since, The Unexpected Guest brought it all back – the quaint atmospheric setting, the proper British characters, and most of all, the joy of trying to guess “whodunit.” While my theatre sensibilities have changed to where I can now see that Christie is perhaps not the most exciting dramatist, this is no fault of Theater Breaking Through Barriers’ steady, and occasionally even great, production.

It’s a foggy night in South Wales. As the lights come up, we see a man (Michael Starkwedder, excellently played by Nicholas Viselli) entering a study through a window, only to find a woman holding a gun standing over a dead body. The woman, Laura Warwick (Pamela Sabaugh) quickly confesses to the murder – the victim is her husband, the cruel, wheelchair-bound Richard Warwick. Could it really be this simple? Of course not. Starkwedder doesn’t believe she did it, or perhaps feels that someone so pleasant shouldn’t go to jail for murder, so the two start concocting plans to shift the blame elsewhere. And other members of the house awaken. And the plot thickens…

As is the case with any Agatha Christie mystery, there is no shortage of suspects, I mean characters – your standard assortment of family members, servants, police officers, and a few others, any one of which could be the killer. The cast is somewhat uneven, but along with Viselli’s Starkwedder, I liked Scott Barton as the mysterious neighbor Julian Farrar, Melanie Boland as the victim’s mother, and especially Christopher Imbrosciano as Warwick’s half-brother Jan. Christie’s plays can sometimes drag, especially in Act 2 as we rehearse the various psychological motives (and occasional red herrings), and Imbrosciano brings a youthful energy to the evening that enlivens every scene he is in.

It’s also worth mentioning that, since this is Theater Breaking Through Barriers, the cast integrates able-bodied actors with those who have various physical disabilities. What was most interesting to me was how this drew my attention to the disabilities mentioned in Christie’s script: along with Warwick’s wheelchair, there is his mother’s being “ a little deaf” and the fact that Jan is “retarded” (hey, it’s a play from 1958). While I’m not sure if this was a reason the late Ike Schambelan (TBTB’s Founding Artistic Director) chose this play, it does serve as a trenchant reminder that we are all in fact temporarily abled, one that might not be as noticeable with a more traditional cast.

Is this Agatha Christie’s best mystery play? Probably not. While there are of course many plot twists and turns, there are also some slow parts, and the final denouement is…perhaps a bit unsurprising (once you know what it is, of course). Aside from the casting, this is an incredibly traditional production, thanks in large part to Amanda Jenks’s period costumes, Sam Crawford’s sound design with its old-time radio announcer, and Bert Scott’s deer-head covered study, although the forced perspective was a bit disorienting in such a small space (which may have been the point). And just like my hometown company, TBTB gives you the opportunity to hazard a guess during intermission. Also fun is that afterwards the cast assembles onstage to reveal how many audience members guessed each of the different characters. TBTB’s The Unexpected Guest is a perfectly pleasant way to pass an evening – after all, there’s nothing like a good murder to bring people together.

(The Unexpected Guest plays at Theatre Row’s Clurman Theatre, 410 West 42nd Street, through May 10, 2015. Performances are Wednesdays and Thursdays at 7PM; Fridays at 8PM; Saturdays at 3PM and 8PM; and Sundays at 3PM. Tickets are $45. For tickets visit telecharge.com or call 212.239.6200. For more information visit www.tbtb.org.)