The Undeniable Sound of Right Now 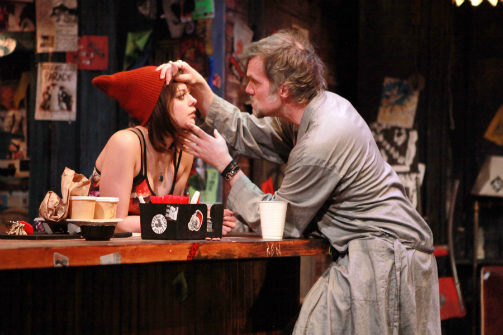 Margo Seibert and Jeb Brown in The Undeniable Sound of Right Now. Photo by Sandra Coudert.

BOTTOM LINE: This solid co-production muses on gentrification and the music industry.

Laura Eason, the buzzy playwright and writer behind the critically acclaimed play Sex with Strangers and Netflix's House of Cards, sees her newest work in good hands in an exciting co-production between Rattlestick Playwrights Theater and Women's Project Theater. The Undeniable Sound of Right Now, which takes place in an early 1990s nightclub, paints a bleak portrait of a changing music industry as seen through the eyes of its manager and his young adult daughter.

Hank (Jeb Brown) has invested the last 25 years of his life passionately running Hank's, a dive bar and music venue that served as the career springboard for many legendary bands and artists, and Hank has no plans to stop. He and his daughter Lena (Margo Seibert) are committed to keeping the slightly rusty establishment on its feet, despite the gentrifying neighborhood (and subsequent rising rent prices) and the turning tides of an industry newly fascinated with DJs and drug-fueled raves. Throughout the play, a greedy new landlord (Chris Kipiniak) and a fling between Lena and a local DJ (Daniel Abeles), prove that the bar's colorful legacy may not be enough to combat its current reality.

The play unfolds at Hank's Bar, recreated with impressive realism and detail by scenic designer John McDermott, and is directed with honesty by Kirsten Kelly. The acting is strong across the board from the six-person cast, with particularly enjoyable supporting performances from Brian Miskell as Toby, a loyal bar employee, and Lusia Strus as Bette, Hank's ex-wife and long-time girlfriend. The relationships between the characters most deeply rooted to Hank's Bar - Hank, Lena, Bette, and Toby - are the most interesting, providing often nuanced, touching, and sometimes sad depictions of people grappling with the unavoidable by-products of growing older and facing change.

This co-production between two companies known for their bold original work and support of new and under-represented artists raises relevant questions about gentrification and art, and runs at a succinct 90 minutes with no intermission. It may not leave you feeling warm and fuzzy, but the sharp writing and well-etched characters take the audience on an intimate journey that speaks to larger issues worth examining today.

(The Undeniable Sound of Right Now plays at the Rattlestick Playwrights Theater, 224 Waverly Place, through May 2, 2015. Performances are Mondays, Wednesdays, and Thursdays at 7PM, Fridays at 8PM, Saturdays at 2PM and 8PM, and Sundays at 3PM. Tickets are $45; $20 for under 30/theater artists and $10 for students. For tickets and more information visit www.rattlestick.org/usorn or call 866.811.4111.)