Travels With My Aunt

Based on the novel by Graham Greene; Adapted by Giles Havergal
Directed by Jonathan Silverstein
Produced by Keen Company 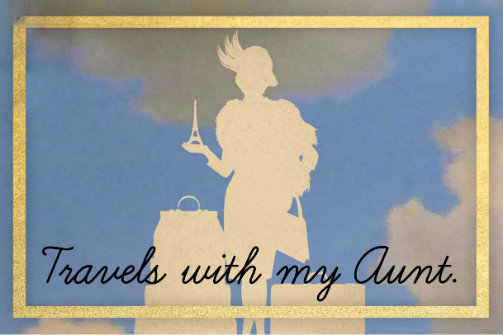 BOTTOM LINE: A romp from place to place, character to character, revealing the toll time can take on viewpoints and moralities.

Oh! Jolly good! An old-fashioned tale told by four Englishmen, each portraying different genders and taking on a variety of ethnicities, but together telling the story of an uninteresting man named Henry and his flamboyant Aunt Augusta. Henry enjoys staying home, gardening, and thinking about someday marrying a dull woman. Aunt Augusta, on the other hand, is a honeybee, moving from plant to plant, pollinating the world around her. Where ‘ere she goes, the flowers bloom.

In Travels With My Aunt, directed by Jonathan Silverstein, three actors take turns playing the retired Henry. The fourth (a boyish Rory Kulz) fills in the other characters and location set-up. We meet Henry as he walks into a funeral for his dearly departed mother. There we meet Aunt Augusta (a very successful portrayal by Thomas Jay Ryan as a sort-of-Nathan-Lane-in-The-Bird-Cage). She is a woman of many secrets, adventures, and opinions. She’s not afraid to share any of them. We are immediately taken with her. She speaks her mind, she speaks the truth, and she does whatever she wants. She may be 75, but she has many more escapades up her sleeve. We are here for the ride.

Aunt Augusta wants to travel. She wants to travel with Henry. We set off on trips from Europe to Turkey to South America, meeting many eccentric people along the way. It’s a difficult feat to pull off, and these are fine actors, moving seamlessly in and out of characters. Bravo. But…

The first of the many characters we meet is Mr. Wordsworth (Dan Jenkins), a black man—or as Henry says, “a negro”—from Grenada who is aunt Augusta’s body guard/butler/lover. He is a presence throughout, being completely devoted to a woman much older than he is. And, of course, he’s portrayed by one of the other (white) actors.

In fact, this pattern is continued throughout the play. This is a story being told by a white man (or three white men) named Henry and, since each actor playing Henry must also portray characters Henry encounters, I suppose the conceit could make sense. Still, hearing a white guy do a Grenadian accent is a bit cringe-worthy.

We also meet Aunt Augusta’s long-time love, a shady businessman named Mr. Visconti (performed well by Dan Jenkins). A wheeler and dealer, Visconti is wanted by the Turkish government. He also used to deal art to the Third Reich. Yep, the Third Reich. Which really doesn’t seem to phase anyone in the story nor have any real import on the overall play. Which is also a bit a bit cringe-worthy.

In the end, Henry loosens up and decides to never go back to being a bore. He changes out of his drab three-piece suit into a new, light, South American look. He throws caution to the wind and is going to marry a beautiful girl, and a lover of English poetry. She’s also sixteen years old. Which also seems a bit, well, you know.

So, what is the moral of the story? Maybe it’s “those who live dangerously get the most rewards”? Or perhaps, “being boring will get you nowhere”? More likely it’s what Aunt Augusta vehemently reminds us: “Never presume yours is a better morality.”