Written and Performed by Eliza Bent; Directed by Kevin Laibson 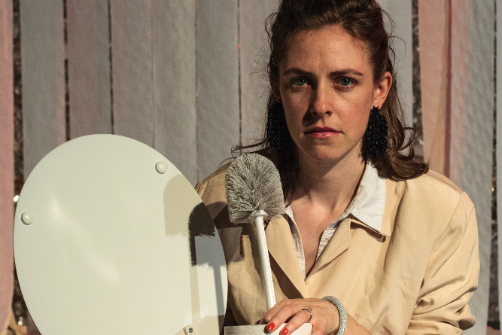 BOTTOM LINE: A tremendous new solo work about what we usually keep behind locked doors.

Welcome to the Keester Service. Clad in a plethora of toilet paper roll curtains and an alter of fuzzy toilet covers, this is a service to the great gods (or devils) of gluten: Cheez-Its and rice. Think about what that sounds like and you’ll be right inside the mind of the amazing Eliza Bent and her new solo piece about -- what else? -- poop.

Greeted by a character who is a resemblance of Ana Gasteyer’s opera singing, high school piano teacher character on SNL (played convincingly by Alaina Ferris), the audience sings along to terrible odes to our bowels with words that scroll on a helpless PowerPoint presentation. As Ferris provides the musical accompaniment for the show, writer Eliza Bent appears as a variety of characters who have come to testify and give their “conflushions” at this Keester Service. Bent's performance is understandably comedic but also tremendously convincing in dialect and sensitive characterizations ranging from a fashionable Italian woman to a bearded old man with a collection plate, to a nuanced Jewish woman from Long Island.

But where Toilet Fire is truly at its finest is when Bent meets us as Eliza, turns off the projector, and makes her truest confession of all. Her part Jewish/part Catholic guilt has inspired a world of bodily shame about her unflattering digestion issues that she conquers unabashedly in Toilet Fire. It’s here that she pulls the plug out of the joy of the characters to find the heart of her play, and it’s worth taking notice.